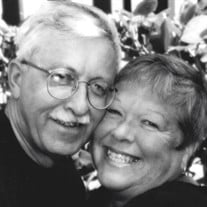 James (Jim) Allen Gentry, Jr., 87, of Snellville passed away peacefully on Saturday, February 27, 2021 at Johns Creek Senior Living Care after being diagnosed with vascular dementia five years ago. Jim was born on February 22, 1934 in Cobb County, Georgia to Flonnie and James Allen Gentry, Sr. and was raised in Marietta. He was a 1952 graduate of Marietta High School, where he met the love of his life, Joann (Jo) Burns. He attended Oxford College of Emory University and then Emory University Business School (now Goizueta Business School), graduating in 1956. He started his career in public accounting with Arthur Andersen, but those plans were put on hold when he received his draft notice on his wedding day in November of that same year. After almost two years with the Army at Fort Benning, he returned to Atlanta to resume his public accounting career and also teach part time at Goizueta. In 1960, he and Jo and their one-year-old daughter moved to Chapel Hill, NC so that he could pursue his Masters and PhD degrees in Accounting at the University of North Carolina. They returned to Atlanta in 1965, where Jim began a 34 year teaching career at Emory University, retiring as Professor Emeritus in 1999. Over the years he taught some 10,000 students. In addition to teaching, which was his passion, he also served as Area Coordinator of Accounting for the business school and chaired both the MBA and BBA Program Committees. In 1998 he was awarded the Donald R. Keough Award in recognition of contributions to the enhancement of the Goizueta Business School. He was an active member of the Georgia Society of CPAs, and received that organization’s Outstanding Service Award in 1992 as well as 1998 Accounting Educator of the Year. During his tenure at Emory, he also co-authored three accounting textbooks and established and taught the Becker CPA Review Course for the Southeast for many years. When Jim and Jo returned to the Atlanta area from Chapel Hill, they settled in Clarkston to raise their family. They were longtime active members of Clarkston Baptist Church, where Jim was a deacon for most of those years and served as Chairman for several. He was very involved in the lives of his four children, always finding time to coach their sports teams, lead several of their church youth programs, and serve with Jo as co-president of the Jolly Elementary PTA. He was also an avid collector of minor league baseball memorabilia, a longtime hobby which he continued into his 70s. He and Jo loved adventures and making memories for their children, and for at least a month every summer for years, they would pack the kids in their VW van, pulling a Coleman pop-up camper and exploring most of the U.S. and parts of Canada. With their kids nearly grown, they then fell in love with Sanibel Island, FL and looked forward to spending several weeks a year on “their” beloved island with as many family members as possible. Once Jim retired from Emory, they moved to Snellville and became members of First Baptist Church of Grayson. Jim was known as a sweet, gentle soul, and his children have lived their entire lives without ever once seeing him angry. His faith and family were always his top priorities, and once his grandchildren were born, he found even more joy in his family than he thought possible. He was Papa to his seven grandchildren, and he was their hero. He left an indelible mark on their lives as a true man of God and one who always put others first and treated everyone with kindness. He had a huge heart, a great laugh (especially at his own corny jokes), and he never met a stranger (“I think that fellow over there wants me to come talk to him.”). He had a joyful spirit and was an eternal optimist. He is now singing with the angels and is reunited with his precious Jo. Jim was preceded in death by Jo, his soulmate and wife of almost 53 years, his parents, and his youngest brother Dick Gentry. He is survived by his children Jamie (Bob) Nelson, Julie Gentry, Jay (Lesley) Gentry, Jenny Molter, his grandchildren Haley Nelson (Jeff Borsuk), Eric Nelson, Jenna Nelson, Mitchell (Katie) Gentry, Ashley Gentry (Palmer) Brasher, Mackenzie and Anderson Molter, and by his brother and sister-in-law, Jack and Elizabeth Gentry. He also leaves behind a large extended family who adored him, including many nieces and nephews. The family would like to thank Johns Creek Senior Living Care and Agape Hospice Care for providing such gentle and loving care for Jim during the last four weeks of his life. Donations in his memory may be made to Agape Hospice Care, 1395 S. Marietta Parkway SE, Building 700, Suite 750, Marietta, GA 30067. A memorial service to celebrate Jim’s life will be announced at a later date once it is safer for friends and family to gather. Condolences may be sent or viewed at www.wagesfuneralhome.com. Tom M. Wages Funeral Service, A Family Company, 3705 Highway 78 West, Snellville, GA 30039 (770-979-3200) has been entrusted with the arrangements.

The family of James A. Gentry, Jr. created this Life Tributes page to make it easy to share your memories.

Send flowers to the Gentry, family.