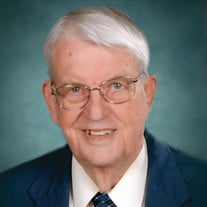 James Lamar Brown, 91, of Tucker and recently of Lawrenceville, died peacefully on May 15, 2021, leaving behind numerous family, relatives, and friends whose lives are richer because of his legacy of integrity, generosity, and willingness to serve others. He was born on August 17, 1929, in Dodge County, Ga., to Venie and Winnie Brown, and attended schools in Laurens County, Ga., and at Spartanburg Junior College and the University of Georgia. He married Juanita Johnson Brown on December 31, 1949, a marriage that lasted 71 years and was interrupted only by his death. Jim was a U.S. Army veteran who served in Alaska during the Korean War. He worked for Exxon for 35 years in locations throughout Georgia and South Carolina. Jim and his family were active church members everywhere they lived, particularly at Vineville Baptist Church in Macon, Ga. Jim and Juanita have been members of Smoke Rise Baptist Church in Stone Mountain for the past 33 years, where he served as a deacon and Sunday school teacher. He believed in being a “doer of the word” (James 1:22) and among his many activities at Smoke Rise, Jim was an active participant in mission trips to Honduras, Pikesville, Ky., and Biloxi, Miss. It was on one of several mission trips to Tijuana, Mex., that he had the stroke which led to the onset of his cognitive issues and dementia. Although he lived another 15 years, the disease gradually but steadily took its toll on this kind, gentle, and beloved man. After the stroke, Jim also had to give up his role as a volunteer crew leader with Habitat for Humanity. In addition to his beloved wife, Juanita, he is survived by his children, the Rev. Beth Shugart and her husband Alan, Lynn Rogers and her husband David, and twin sons Donald Brown and his wife Darlene and Douglas Brown and his wife Dean; brothers, Dr. Harold Brown (Pat) and Robert Brown (Margaret); and sister, Georgia Horton. He is also survived by his seven beloved grandchildren and four great-grandchildren. A service to commemorate Jim’s life will take place at Smoke Rise Baptist Church in Stone Mountain on Saturday, May 22, at 11:00 a.m. There will be visitation with the family at the church before the service beginning at 10:00 a.m. In lieu of flowers, memorial gifts may be made to Smoke Rise Baptist Church (5901 Hugh Howell Road, Stone Mountain, GA, 30087) or St. Jude Children’s Research Hospital (stjude.org or 262 Danny Thomas Place, Memphis, TN, 38105). Condolences may be sent or viewed at www.wagesfuneralhome.com. Tom M. Wages Funeral Service, A Family Company, 3705 Highway 78 West, Snellville, GA 30039 (770-979-3200) has been entrusted with the arrangements.

James Lamar Brown, 91, of Tucker and recently of Lawrenceville, died peacefully on May 15, 2021, leaving behind numerous family, relatives, and friends whose lives are richer because of his legacy of integrity, generosity, and willingness to... View Obituary & Service Information

The family of James L. Brown created this Life Tributes page to make it easy to share your memories.

James Lamar Brown, 91, of Tucker and recently of Lawrenceville,...

Send flowers to the Brown family.