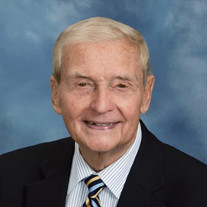 [Click here to view livestream] https://smokerisebaptist.org/jb-neal/ J. B. Neal age 91 of Lilburn, GA., passed away, Wednesday, September 29, 2021. J.B. was born in Hampton, VA., following graduation from high school, in 1950 he began courting Joyce Rawls and they were married in 1951. In 1952 he was called to duty as a U.S. Marine upon his return home he worked at Virginia Electric and Power Company and he retired. During his lifetime he devoted many hours to the Richmond Host Lions Club, Richmond Choral Society and Richmond Men’s Chorus as well as serving as the Director of Music for 38 years at Southampton Baptist Church. As a young boy, he was a member of Hampton Baptist church where he began his love for music. When he became a Marine, following boot camp, he was asked what he would like to do, he had a ready response, “I play the trombone”. He played it well enough to land a spot in the 3rd Division Marine Corps Band, and marched in the Rose Bowl Parade in 1953 on his way to Japan, where he was stationed for about a year. After his honorable discharge, he and his wife Joyce settled in Hampton, VA, where he began working in the Forestry Division of Virginia Power Company. His daughter, Debbie, was born in 1954. In 1961, he was transferred to Richmond, VA where he served 38 years as the Director of Music for Southampton Baptist Church. After 44 years of service, he retired from Virginia Power and heand his wife, Joyce, moved to their retirement home in Matthews, VA in 2000. Unfortunately, the time was short for his wife, Joyce. She passed in 2004. JB became an icon of enthusiastic good will and gracious hospitality at Macedonia Baptist Church where he lead the music each Sunday. In 2015, JB moved to Georgia to be near his family. Becoming a member of Smoke Rise Baptist Church and the Seekers class opened the door to so many precious friendships. They welcomed and embraced him and made the last six years of his life a total joy. He will be remembered for his big smile, his big hugs and his big love for life. JB is survived by his daughter Debbie Scott, son-in-law, Charlie Scott, Grandson John Neal Scott and his wife Hailey, his great-grandchildren, Emery Jane, Amelia and Nash, his sister, Louise Knemeyer and numerous beloved nieces and nephews. Services will be held at Smoke Rise Baptist Church, 5901 Hugh Howell Rd, Stone Mountain, GA 30087, October 24, 2021, visitation 1:00-3:00 pm and service at 3:00 pm Memorial gifts in his name may be made to Smoke Rise Baptists Church. Due to COVID-19 regulations, our staff is committed to taking care of our guests and families that we serve. We also ask all guests and family members attending visitations and services to please continue social distancing and if desired to bring and wear a mask. Condolences may be sent or viewed at www.wagesfuneralhome.com. Tom M. Wages Funeral Service, A Family Company, 3705 Highway 78 West, Snellville, GA 30039 (770-979-3200) has been entrusted with the arrangements.

The family of J. B. Neal III created this Life Tributes page to make it easy to share your memories.

Send flowers to the Neal family.