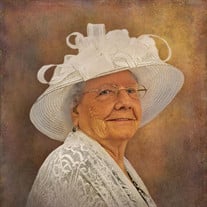 Irene Brownlee Jordan, age 95, of Loganville, Georgia, went home to be with her Lord and Savior on Sunday, September 19, 2021 at her home surrounded by her loving and devoted family. She was predeceased by her husband of 51 years Von Herman Jordan on February 23, 1992. Mrs. Jordan was born on October 23, 1925, to Carl Daniel Brownlee and Eunice Moore Brownlee at the family home place on Rockbridge Road near Corinth Baptist Church in Stone Mountain. She attended school in that area and married Von Jordan on May 31, 1941. She worked at the former Genesco Shoe Factory in Lawrenceville for 14 years until its closure, then worked at Dart Container Corporation for 15 years and was best known as a “Greeter” at Walmart at the Mountain Park and Snellville Locations for 15 years. Mrs. Jordan was a member at Chestnut Grove Baptist Church and was a devoted servant of her Lord and Savior. Her favorite past times were working in her flowers, reading, and traveling with friends and family. Her quick-wit and strong work ethic led her to be a strong independent woman. Her greatest love in life was her family. She was a devoted wife, mother, grandmother, great grandmother, great great grandmother, aunt and loyal friend. Mrs. Jordan will be deeply missed by her adoring family and her friends that she had over the years. Mrs. Jordan leaves to cherish her memory; five children, Kenneth & Pat Jordan of Lyons, GA, Judy & Don Barrett, Tommy & Linda Jordan, Joan & James Kilgore and Jeannie & Stanley Brown all of Loganville, GA; 13 grandchildren, Michelle, Ken, Billy (deceased), Steve, Chris, Tommy, Jr., Tim, Joy, Wesley, Michael, Paul, Brian, and Jennifer; 24 great grandchildren, 7 great-great grandchildren, and numerous nieces & nephews. Her caretakers, Barbara Lawson, Wanda Taylor, and her loyal cat, Mr. Tom will also cherish her memory. Mrs. Jordan was also predeceased by her parents, grandson, Billy Barrett, 5 sisters, Edna, Beulah, Mildred, May, Fay and 1 brother, CD. A special thanks to Encompass Hospice, especially nurse Kemi. Funeral Services to Honor and Celebrate the Life of Mrs. Irene Brownlee Jordan will be held Thursday, September 23, 2021 at 11:00 A.M. at Tom M. Wages Snellville Chapel with her son, Pastor Tommy Jordan and Rev. Rick Standard officiating. Interment will follow at Eternal Hills Memory Gardens. The family will receive friends on Wednesday, September 22nd from 4:00 P.M. to 8:00 P.M. at the funeral home. Flowers are accepted. Condolences may be sent or viewed at www.wagesfuneralhome.com. Tom M. Wages Funeral Service, 3705 Highway 78 West, Snellville, GA 30039 (770-979-3200) has been entrusted with the arrangements.

Irene Brownlee Jordan, age 95, of Loganville, Georgia, went home to be with her Lord and Savior on Sunday, September 19, 2021 at her home surrounded by her loving and devoted family. She was predeceased by her husband of 51 years Von Herman... View Obituary & Service Information

The family of Irene Brownlee Jordan created this Life Tributes page to make it easy to share your memories.

Send flowers to the Jordan family.