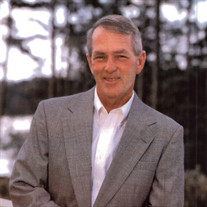 Click here to view Livestream On Tuesday, October 26, 2021 in Loganville, GA, Houston James Feaster a loving husband, father and grandfather, passed away at the age of 76. Houston was preceded in death by his parents, Houston Howard Feaster and Marie Florence Donaghey Feaster; and his brother-in-law, Roland Albert Wahl. He is survived by his wife of 53 years, Margaret Anne Feaster; son, Houston Howard Feaster II (Katrienne) of Brookhaven, GA; and daughters, Suzanne Marie Feaster of Lilburn, GA and Ieleen Elizabeth Torrence (Michael) of Watkinsville, GA.; his brother, Colma Howard Feaster (Geraldine) of Spanish Fort, AL; and four sisters, Florence Feaster Stanton of Mobile, AL, Rebecca Feaster Wahl of Slidell, LA, Carol Feaster Johns (Daryl) of Daphne, AL and Malinda LaMay (Gerald) of Grand Bay, AL.; four grandchildren, Sutton Elizabeth Feaster, Patrick Houston Feaster, Bailey Eliza Torrence and Major Jeffrey Torrence. Houston was a devout Catholic who loved our Lord and was known for his good deeds in his parish and neighborhood community. He was a big brother or a father figure to everyone he met. When a friend called with a problem, he rushed to solve it. His daily acts of kindness were his way of proclaiming and living his Christian faith. Houston was born January 31, 1945 and grew up in Mobile, AL. He played football at McGill Catholic High School and attended the University of Alabama. He then transferred to the University of South Alabama, where he founded the Sigma Nu fraternity chapter and graduated with a Bachelor’s degree in Business. Houston served in the Army Reserves before he and Anne married on August 24, 1968 and moved to Lilburn, GA. He quickly advanced to become the Branch Manager at Gwinnett Bank & Trust. He was also very active with the Jaycees and eventually took the reigns as the organization’s President. Healthy and fit, Houston took up running and ran the Peachtree Road Race for over forty years. He assisted Father Reynolds in building the original parish building of St. John Neumann Catholic Church. He assisted with the parish’s construction by serving as Chairman of the Pastoral Board, Chairman of the Finance Committee and as a member of the Building Committee. After the birth of his three children, Houston was very involved in his children’s activities, some examples were as den leader of Cub Scouts, coaching baseball, and simply spending time with his kids throwing the ball in the backyard. To this day, he has been a mentor for two young boys who lost their father early in life. In 1986, Houston started his own business as a self-employed homebuilder for his company Houston Homes, Inc. Houston became involved in a parish-wide effort to help unemployed parishioners to find jobs, he was a long-standing active member of St. John Neumann parish, a Eucharistic Adoration Guardian, and an active member of the Knights of Columbus, even serving a term as Grand Knight. He was the parish photographer, volunteering to take photos of church events. He also served on the S.M.I.L.E. (St. Mary’s Independent Living Extensions) committee that offers living solutions for developmentally delayed adults. His greatest passion was hunting and just spending time at deer camp managing and caring for the land, always preparing for the next hunting season. He also enjoyed riding his motorcycle, deep sea fishing, boating, photography, reading war literature and spending time with his family. The funeral mass for Houston will be held on Tuesday, Nov. 2nd, 2021 at 11:00 am at St. John Neumann Catholic Church. Family will receive friends beforehand at 10:00 am for a visitation hour. The Mass will be followed by a burial service and a reception in the parish hall. For those who prefer to make memorial donations in lieu of flowers please consider a donation to S.M.I.L.E at www.smile4.info in memory of Houston Feaster. Condolences may be sent or viewed at www.wagesfuneralhome.com. Tom M. Wages Funeral Service, A Family Company, 3705 Highway 78 West, Snellville, GA 30039 (770-979-3200) has been entrusted with the arrangements.

[Click here to view Livestream]https://sjnlilburn.com/online-masses On Tuesday, October 26, 2021 in Loganville, GA, Houston James Feaster a loving husband, father and grandfather, passed away at the age of 76. Houston was preceded in death... View Obituary & Service Information

The family of Houston Feaster created this Life Tributes page to make it easy to share your memories.

Send flowers to the Feaster family.