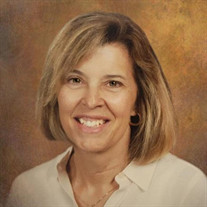 Holly Theresa Mercer was a loving wife, mother, grandmother, sister and friend. Surrounded by family, she passed away on January 31, 2022 at age 66 due to complications from early onset dementia. Born to Robert A. and Marian L. Heck in Norwalk, Connecticut on July 11, 1955, Holly graduated from New Milford High School in 1972, attended Katharine Gibbs School and later married her high school sweetheart. She was a beautiful and devoted homemaker to their three children. She was known as “Grammy” to her five grandchildren. Holly was passionate about her family, her faith and her close friendships. She volunteered much of her time at her church. She adored babies and children. She gave new meaning to “shop til you drop.” She enjoyed music, singing, dancing and traveling, especially to the beach. Her smile could light up an entire room. She was generous nearly to a fault and loved with her entire heart. She was as warm as she was feisty, as much of a sounding board as she was a conversationalist. Family meant the most to Holly, whether immediate or extended, and once she invited someone into her circle, she never let them go. Holly is survived by her husband of 45 years, Michael J. Mercer; children, Nicole M. Santoro (Michael), Sara L. Watkins (Jay), and Dillon J. Mercer (Ariel); grandchildren, Cooper Watkins, Sophia Santoro, Natalie Santoro, Tessa Kate Watkins, and Mason Santoro; sister, Robin A. Saude (John); brother, Robert A. Heck, Jr. (Debbie); along with a host of in-laws, nieces, nephews and more. She was preceded in death by her parents. To celebrate Holly’s life, a visitation will be held at Tom M. Wages Funeral Home at 120 Scenic Highway in Lawrenceville, Georgia on Friday, February 18, 2022 from 5:00 to 8:00 p.m. A funeral service will be held at St. Lawrence Catholic Church at 319 Grayson Highway in Lawrenceville, Georgia on Saturday, February 19, 2022 at 2:00 p.m. The family would like to extend its sincere gratitude to Sunrise at Webb Gin for loving and taking care of Holly, and by extension her family, so kindly during the last years of her life. In lieu of flowers, please consider making a donation to Alzheimer’s Disease Research at brightfocus.org/stopAD in Holly’s memory. Condolences may be sent or viewed at www.wagesfuneralhome.com. Tom M. Wages Funeral Service, 120 Scenic Hwy., Lawrenceville, GA 30046 (770-963-2411) has been entrusted with the arrangements.

Holly Theresa Mercer was a loving wife, mother, grandmother, sister and friend. Surrounded by family, she passed away on January 31, 2022 at age 66 due to complications from early onset dementia. Born to Robert A. and Marian L. Heck in Norwalk,... View Obituary & Service Information

The family of Holly Theresa Mercer created this Life Tributes page to make it easy to share your memories.

Send flowers to the Mercer family.