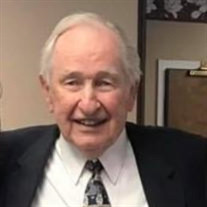 Henry (Hank) Ford Roberts Jr., of Stone Mountain tendered his last train at 5:00 am on March 24, 2022 from Snellville, GA to his next destination at the age of 84. Hank was the last of all five children of Henry Ford Roberts and Barbour Bruce Roberts from Russell, Kentucky; he is also preceded in death by his wife, Faye Ely Roberts; and stepdaughter, Patrice Powers Layton. Surviving are his children, Randal Baxter Roberts (Sharon), Cynthia Roberts Pavey, Patrice Marie Green (Johnny), and stepdaughter Margie Mauldin; he had twelve grandchildren, Robbie Mitchell (Tammy), Michael Roberts, Courtney Jackson (Chris), Lindsey Stevens (Rick), Christina Finch (Curtis), Sean Green, Rachel Lee (Jason), Tyler Green (Emilie), Megan Paul (Brian), Stephen Mauldin, Richard Layton and Derek Layton (Jessica); who blessed him with sixteen Great grandchildren. As a Navy veteran, he was stationed in Puerto Rico as a Sonar Specialist. Sound must have been in his future as he spent his entire life as a Sound Engineer with Baker Associates retiring in 2003. Hank was part of the sound engineering when the Beatles performed at the Atlanta Stadium with Brian Epstein stating, “The sound system was excellent and without a question the most effective of all during our U.S. Tour 1965.” As the owner of HRTronics, he worked the sound system at the Atlanta Fulton County Stadium from opening day April 9, 1965 until they moved to Turner Field. Between work and family, in the evenings he attended and graduated from Georgia State University. Prior generations worked many aspects in the Railroad industry which influenced him at an early age. His love of trains followed him throughout his life. This influence took him to model railroading as his hobby where he is a Lifetime member of the Chattanooga Society of Model Engineers. His favorite memory was being the lead engineer of a C&O locomotive in Kentucky. The funeral service to celebrate the life of Henry Ford Roberts, Jr., will be held on Monday, March 28, 2022 at 11:00 AM at Tom M. Wages Snellville Chapel, Snellville, GA. Interment will follow at Eternal Hills Memory Gardens, Snellville, GA. The family will receive friends on Monday, March 28, 2022 prior to the service from 10:00 AM until the time of service 11:00 AM at the funeral home. In lieu of flowers, donations can be made to the American Heart Association, www.heart.org or his beloved train group, Chattanooga Society of Model Engineers (CSME), P O Box 642, Dunlap, TN 37327-0642, in memory of Henry Ford Roberts, Jr. Due to COVID-19 regulations, our staff is committed to taking care of our guests and families that we serve. We also ask all guests and family members attending visitations and services to please continue social distancing and if desired to bring and wear a mask. Condolences may be sent or viewed at www.wagesfuneralhome.com. Tom M. Wages Funeral Service, A Family Company, 3705 Highway 78 West, Snellville, GA 30039 (770-979-3200) has been entrusted with the arrangements.

Henry (Hank) Ford Roberts Jr., of Stone Mountain tendered his last train at 5:00 am on March 24, 2022 from Snellville, GA to his next destination at the age of 84. Hank was the last of all five children of Henry Ford Roberts and Barbour Bruce... View Obituary & Service Information

The family of Henry F. Roberts Jr created this Life Tributes page to make it easy to share your memories.

Send flowers to the Roberts family.