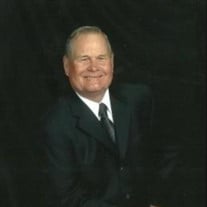 Henry Thomas McGee, Jr., age 88, of Lawrenceville, Georgia, entered into Eternal Life on Saturday, September 25, 2021. He was preceded in death by his beloved wife of 38 years, Eugenia Craig McGee. Mr. McGee was born in Alamo, Georgia (Wheeler County) on March 15, 1933 to Henry Thomas McGee, Sr. and Dessie Humphrey McGee. He was educated in the Wheeler County School System and upon graduation entered the United States Army serving during the Korean Conflict. He was a Jeep Driver assigned to the Platoon’s Colonel. When Mr. McGee retired home from the service, he attended Piedmont College and met & married Eugenia Craig. He worked as a Line Supervisor for over 35 years with Georgia Power (The Southern Company). He supervised numerous crews and outside contractors in laying one of the first underground cable systems in Georgia (Duluth area). Mr. McGee was active in the Georgia Power Ambassadors Program. Mr. McGee was a faithful servant at Lawrenceville Presbyterian Church where he served as an Elder and Deacon, member of the Kitchen Class, and was a great supporter of the education programs, especially the Kindergarten where his wife, Eugenia served for many years. The McGee Family has served Lawrenceville Presbyterian Church for over 60 years. Mr. McGee was present for the ground breaking ceremonies for the Church and the expansion that was done. Mr. McGee loved to entertain and take care of everyone at an event. He loved to dance and attended the American Cancer Society Ball for years. Everyone that knew Mr. McGee referred to him as “PaPa Henry.” He loved his family, especially his grandchildren. He loved life, especially working in his yard. He was “very meticulous” about the work done in the yard. You had to have his blessing to work in the yard and once he could no longer work in the yard himself, he would supervise from his walker. He loved to cook for his family and friends, especially during the holiday seasons. Mr. McGee will be deeply missed by his adoring family and also his church family. Mr. McGee leaves to cherish his memory; son & daughter-in-law, John McGee and his wife Christine “Chris” Reilly McGee; daughter & son-in-law, Melissa "Lissa" Gilstrap Brooks and her husband, Eric Brooks; grandchildren, Hunter, Allie & Branan McGee and Jordan & Mandi Gilstrap; brother, Peter McGee; sister, Betty Jo Ragon; other relatives and a host of friends. Mr. McGee was also preceded in death by daughter, Leila Candler McGee, aunt, Polly Branan, and many siblings. The Memorial Service to Honor and Celebrate the Life of Henry McGee will be held on Friday, October 1, 2021 at 4:00 P.M. at Lawrenceville Presbyterian Church with Pastor Ryan Jensen officiating. The family will receive friends from 2:00 P.M. until the hour of the service on Friday at the Church. In lieu of flowers, donations can be made to Lawrenceville Presbyterian Church General Fund, 800 Lawrenceville Hwy., Lawrenceville, GA 30046 (770-963-9498) OR MeSun Health Services (Hospice), 88 Johnson Rd., Lawrenceville, GA 30046 (404-369-1907) in memory of Henry Thomas McGee, Jr. All floral arrangements for the service should be delivered to the church by 1:00 P.M. Condolences may be sent and viewed at www.wagesfuneralhome.com. Tom M. Wages Funeral Service, 120 Scenic Hwy., Lawrenceville, GA 30046 (770-963-2411) has been entrusted with the arrangements.

The family of Henry Thomas McGee Jr created this Life Tributes page to make it easy to share your memories.

Send flowers to the McGee family.