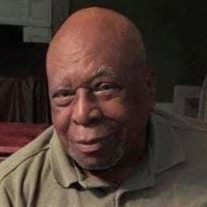 Harley Charles Smith, Sr. favorably known as “The Boss” and “Paw Paw, was born on May 31, 1925, in New Orleans, Louisiana, to his late parents, Herbert Charles Smith and Martha Benton Smith. Harley Smith, Sr., a retired auto body and fender mechanic and lifelong resident of New Orleans, Louisiana, departed this life on July 9, 2021, at the age of 96 years old. Our patriarch grew during the horrible years of the Great Depression and the Jim Crow Era, where his Christian experience was initiated under the tutelage of his maternal grandfather, the late Rev. Joseph Benton. He grew to love this great nation and entered the U.S. Navy at the age of 17 where he served during World War II, after which, he was honorably discharged. He returned home, to New Orleans, to take Mary Louise Talton Smith as his bride in 1948 and unto that union was born four children. They were married 59 years before Mary passed in 2007. Mary Louise became a Community Health Nurse in their neighborhood and later became a Licensed Practical Nurse in 1965. Harley, with a 6th grade education, went on to trade school to become certified as a truck and automotive body and fender repairman. After completing his certifications, he worked for Cologne Drayage and Trucking Company until retirement, in which he became self-employed. He was very successful and went on to expand his list of skills to include automobile engine service and repair. More than working on them, he loved to drive…cars, pickup trucks, SUVs, 10-14 wheeled vehicles, and motorcycles. Paw Paw drove his car solo until he was 95 years old; now that’s a legacy and a challenge. Harley Sr. was living at the home of his youngest son, Harley Jr. in Lawrenceville, Ga. at the time of his unexpected demise. He is survived by his four children Harlette Smith Washington (Alvin) of Chicago, Illinois; Herbert Charles Smith, II (Cynthia Butler) of Winnfield, Louisiana; Kathy Lottie Smith of Macon Georgia; and Harley Charles Smith, Jr. (Paula) of Lawrenceville, Georgia. The family includes 9 grandchildren, Alvin, Jr., Junius III, Herbert III, Harley III, Harlette Jr, Trinity, the late Chanelle Wilson, Erica and Rachel, 17 great grandchildren, 1 great- great grandchild, a host of nieces, nephews, family, and friends. “The Boss’” favorite hobbies were playing Checkers and riding motorcycles. One of his friends (Mr. Nick) would get so caught up that one game could turn into a tournament lasting overnight. They would seriously play for several consecutive days. Harley loved riding his Harley-Davidson motorcycle with his buddies to small towns along the Mississippi River, the bayous, and the shores of the Gulf of Mexico to let the wind blow through his “hair”. Paw Paw told many stories to his children and grandchildren (well anyone who would listen). He left them amazed, as he encouraged them to seek the world for their own adventures. He would often take trips to relatives in other states or and they would come to ours. Folks called their house “the House that Jack built”, because Granny (Mary) kind of had an “open door policy”, when it came to family and friends. Granny always prepared just enough so that there would always be enough food to feed one more. They are both gone now and we miss them dearly, but we have wonderful memories to dwell on and laugh about until our time comes. Condolences may be sent to or viewed at www.wagesfuneralhome.com. Tom M. Wages Funeral Service LLC, “A Family Company”, 120 Scenic Hwy Lawrenceville, GA, 770-963-2411, has been entrusted with the arrangements.

The family of Harley Smith Sr. created this Life Tributes page to make it easy to share your memories.