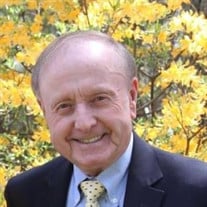 Herman W. Pritchett, known to his friends as Kevin, went to be with his Lord and Savior October 7, 2021. Kevin was born October 11, 1938, in Ocilla, Georgia to Claudus F. and Audra Mae Pritchett. Kevin loved beauty in many forms, and at an early age was attracted to beautiful homes, nice furnishings, great music, and architecture. These were things which he did not have as he grew up, but was born with God-given talents that he later developed and used as an Interior Designer and Musician. Kevin is preceded in death by his parents, Claude F. and Audra M. Pritchett; sisters, Eloise Pritchett, Jimmy G. Feazell, Theo F. Evans and Jolene Willis. Kevin served as SE Regional Office Manager in Atlanta with the Institute in Basic Youth Conflicts (now IBLP), whose headquarters is in Oak Brook, Illinois. He also was an overhead operator at video seminars and was with this ministry from 1971-1984. Kevin met Sherry Lynn McCoy at the Miami Beach Convention Center during the “Basic Seminar” presentation where he was overhead operator. He and Sherry were married November 29, 1980. While Kevin was with IBYC, he decorated several offices and staff homes. This led to Kevin realizing his talent in interior design, leading him to resign from the seminar ministry and founding Traditional Plus Interiors. Inc in Lilburn, Georgia. Kevin, Sherry, and their daughter, Lori ran the furniture and interior design business until they closed it in 2012. Kevin decorated and furnished many offices and homes in the Atlanta area, Washington D.C., in many other states as well, and in Europe, and continued as an Interior Designer until his death. Kevin was a member of IFDA (International Furnishings and Design Association), GAIDP (Georgia Alliance of Interior Design Professionals), IIDA (International Interior Design Association), and served as the Georgia Chapter President for IFDA in 1998. Kevin was active with The Pro-Mozart Society of Atlanta, and The Atlanta Music Club, serving on both executive boards. He was president of The Pro-Mozart Society for 5 years, and Co-President for two years, and was Co-President of The Atlanta Music Club during their 2017-2018 Season. Kevin currently was the Vice-President of Programs for The Atlanta Music Club. Kevin always loved church music that honored the Lord. He served as Minister of Music and Youth, Music Director, Organist and Pianist in several churches, most of them in Georgia: Ty Ty Baptist Church, near Tifton; Wesconnett Methodist, Jacksonville, Florida; Winters Chapel Baptist, Doraville; Bible Baptist, Atlanta; Jackson Hill Baptist, Atlanta; Killian Hill Baptist, Lilburn; and Brookwood Presbyterian, Snellville. While attending Tennessee Temple, studying music and Bible, Kevin sang with two male quartets, the A Cappella Choir and the College Glee Club. He also sang tenor with The Chattanooga Concert Choir and the choir at St. Paul's Cathedral. Before marriage, and after moving to Atlanta, Kevin sang with The Atlanta Symphony Chorus under the direction of the late Robert Shaw. Great music was always a huge part of his life. Kevin is survived by his dear wife, Sherry Pritchett; his loving daughter, Lori Pritchett; his precious granddaughter, Cadence Dalton; his sister, Lois Frazier; and one brother, Claude E. “Buddy” Pritchett; many nieces and nephews, and numerous loved friends. The family will receive friends at Tom M. Wages Funeral Home in Snellville, GA, from 3:00-6:00 PM Sunday, October 10, 2021. A Worship of God and Celebration of Life service will be held at Killian Hill Baptist Church, Monday, October 11, 2021 at 10:30 AM; Pastor Chris Anderson, Pastor Joe Boulanger, and Michael N. Riley officiating. Burial will be at the East View Cemetery, 56 4th Avenue, SE, Atlanta, GA, following the celebration service. In lieu of flowers, contributions may be made to Killian Hill Baptist Church Missions Fund or The Pro-Mozart Society Scholarship Fund. Due to COVID-19 regulations, our staff is committed to taking care of our guests and families that we serve. We also ask all guests and family members attending visitations and services to please continue social distancing and if desired to bring and wear a mask. Condolences may be sent or viewed at www.wagesfuneralhome.com. Tom M. Wages Funeral Service, A Family Company, 3705 Highway 78 West, Snellville, GA 30039 (770-979-3200) has been entrusted with the arrangements.

Herman W. Pritchett, known to his friends as Kevin, went to be with his Lord and Savior October 7, 2021. Kevin was born October 11, 1938, in Ocilla, Georgia to Claudus F. and Audra Mae Pritchett. Kevin loved beauty in many forms, and at an... View Obituary & Service Information

The family of H.W. Kevin Pritchett created this Life Tributes page to make it easy to share your memories.

Herman W. Pritchett, known to his friends as Kevin, went to be...

Send flowers to the Pritchett family.