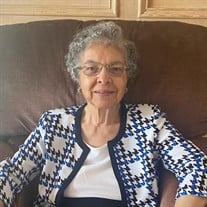 Gladys Marion Glenn passed away on Wednesday March 9, 2022 at age 86. Affectionately known as GG, Grammy, and Mommy G, to family and friends, Gladys was born October 6, 1935 in Philadelphia, Pennsylvania. She was preceded in death by her mother Hannah Elizabeth Demby and four brothers (Harvey, Joseph, John, and Lewis). She is survived by her daughter, Vicki Bagley (Bernard); sons, Michael Edward Glenn and James Edward Glenn, Jr.; grandchildren, Kia M. Bagley and Jared K. Bagley; and great-grandchildren, Shawn, Morgan, Kasseem, Khaleel, sisters-in-law, Mary Wilson and Claudine Chrispin; and a host of nieces, nephews, cousins, and extended family. Educated in the Philadelphia public school system, Gladys graduated with honors from Philadelphia High School for Girls in June 1953. She married the love of her life, James Edward Glenn on June 13, 1954. From this union came a daughter Vicki (Bagley) and two sons Michael and James Jr. She devoted the early years of marriage to raising three children and taking on long hours of secretarial work to help make ends meet. GG’s dream of a future in science and medicine had begun to form long before these humble beginnings would make it seem all but impossible. However, she spoke of a guiding light and inspiration that came to her years before. This gave her an unshakable faith and inner strength to overcome any challenges, no matter how daunting. A love of learning and interest in biology propelled GG to a degree at Cheyney State College where she delivered a speech as valedictorian of the graduating class of May 23, 1971. During the college years, her interest in medicine evolved into a conviction to devote her life to understanding and finding a cure for cancer—one of humanities’ greatest health challenges. In what many have seen as a superhuman feat, Gladys continued her rigorous education while simultaneously continuing to raise a family and work part time. She was always grateful to her husband James who she called chief for taking care of preparing meals and her mother Hannah and later her niece Terry for their assistance with babysitting. Despite these and many other life challenges, GG went on to earn her M.D. in 1976 and Ph.D. in Molecular Biology in 1979 from the University of Pennsylvania Medical School. These achievements were crowned by an internship at John’s Hopkins University in Baltimore, MD. Without skipping a beat, GG began a long and illustrious career at The National Institutes of Health where she collaborated with many of the top researchers in the world. In the following decades, she went on to make significant contributions in cancer research while also working directly with patients in the Institute’s clinical branch. Today, the name Dr. Gladys M. Glenn appears on many medical research papers as author, contributor, and consultant. Patients from around the world came to the clinic where she and her colleagues treated rare conditions in her area of specialty. Her soothing and reassuring bedside manner became legendary. Of her patients it was said: “Their lives have benefitted beyond measure from her life’s work.” After a long, fruitful career at NIH, Gladys retired on January 2014 at age 78. Throughout her demanding career, Gladys always managed to reserve quality time for family and friends. She was a devoted wife, mother, grand and great-grandmother. Family gatherings were always a top priority for her. She made it a point to expose each generation to activities and places that would educate and enhance their lives. In her many roles, Gladys maintained a quiet elegance, poise, and most of all an irrepressibly positive attitude. She was always kind, never judgmental. No one was a stranger. She generously gave guidance and support to everyone who needed help in dealing with life’s many challenges. By whatever name we may have called her, Gladys, GG, Mom, Mommy G, Grammy, Dr. Glenn, will be missed by all and never forgotten by those who were touched by her loving presence. In her later years Gladys began to learn about Jehovah God through a study of the bible. She expressed faith in God’s promise of a paradise earth where there will be no more sickness and death. A memorial service was held on April 9, 2022 where family, friends and former colleagues gathered to comfort each other to celebrate her life. Condolences may be sent or viewed at www.wagesfuneralhome.com. Tom M. Wages Funeral Service, A Family Company, 3705 Highway 78 West, Snellville, GA 30039 (770-979-3200) has been entrusted with the arrangements.

Gladys Marion Glenn passed away on Wednesday March 9, 2022 at age 86. Affectionately known as GG, Grammy, and Mommy G, to family and friends, Gladys was born October 6, 1935 in Philadelphia, Pennsylvania. She was preceded in death by her mother... View Obituary & Service Information

The family of Dr. Gladys Marion Glenn created this Life Tributes page to make it easy to share your memories.

Gladys Marion Glenn passed away on Wednesday March 9, 2022 at...

Send flowers to the Glenn family.