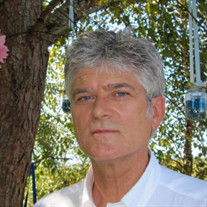 George “Butch” Walter Wood died in his home on Monday, March 9th, 2020, surrounded by loved ones. He was 67 years old. Butch was born to his parents, Ottley and Lillian Wood, on November 30th, 1952, in Atlanta, Georgia. He was drafted into the Army in 1972, where he served as a wheel mechanic for two years. Butch enjoyed his profession working as a dental lab technician for over 35 years. He was married to Susan Maxey from 1977 to 1987. He developed a passion for gardening and tending the property, around his home in Stone Mountain. In 2012, he married Melanie Miller, and found himself attending (and enjoying) many sporting events and acting as resident chaffeur for sons, Aaron and Luke Miller. Butch is survived by his wife, Melanie Wood; sons, Aaron and Luke Miller; sister and brother-in-law, Landis and Jerry West; and sister, Barbara Thompson. Butch was preceded in death by his father and mother, Ottley and Lillian Wood; and his brother, Barry Wood. Butch was a talented photographer, a nature enthusiast, and a loving son, husband, father, and friend. A visitation will be held from 5pm to 8pm on Thursday, March 12th and a service from 11am to 12pm, followed by refreshments, on Friday, March 13th at Tom M. Wages Funeral Home in Snellville, Georgia. In lieu of flowers, please consider making a donation to Lewy Body Dementia Association, 912 Killian Hill Road, SW, Lilburn, GA 30047, www.lbda.org/donate, in memory of George “Butch” Walter Wood. Condolences may be sent or viewed at www.wagesfuneralhome.com. Tom M. Wages Funeral Service, LLC, A Family Company, 3705 Highway 78 West, Snellville, GA 30039 (770-979-3200) has been entrusted with the arrangements.

The family of George "Butch" Wood created this Life Tributes page to make it easy to share your memories.

Send flowers to the Wood family.