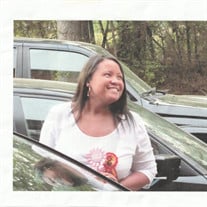 Farran Lorraine Davis, age 32 of Stone Mountain, GA, passed away on Saturday, December 18, 2021, at Our Lady of Perpetual Help Home in Atlanta, GA, after a courageous battle against cancer. Farran was born in Woodbridge, VA, and grew up in Fredericksburg, VA, graduating from Stafford High School in 2007. She earned an associate’s degree from Georgia Perimeter College and a Bachelor of Arts in Anthropology, Writing, and Linguistics from Georgia Southern University. She mentored and taught students from around the world and was part of a summer program for international students at UCLA. She was a member of the Elephants and Teas Cancer Foundation. Farran was a featured contributor in their magazine’s June 2021 publication. Farran was also a gourmet cook and baker, specializing in Asian cuisine with exotic veggies. Her favorite treats were bubble tea and ramen soups. She also especially liked to travel. She was preceded in death by her maternal grandmother Lillian Callen; great aunt Bess Shewsbury; and uncle Ralph Carpenter; as well as paternal grandmother Mary Davis and grandfather Thurmond Ford. She is survived by her loving parents Brenda and Roger Davis, from the home; brother Mark Sutton and family of Detroit, MI; niece Kathleen Sutton of Durham, NC; and aunt Carmen Denise Ford of Winston-Salem NC, as well as several cousins and extended family Rita and Jose Garcia of Stone Mountain, GA, and a host of loyal friends near and far. Farran was a loyal, true, and loving daughter and friend who will forever be missed by her parents. In lieu of flowers, donations may be made to any chapter of the Leukemia and Lymphoma Society, in memory of Farran, at givenow.lls.org, (888)-557-7177. There are no services scheduled for Farran Davis at this time. Condolences may be sent or viewed at www.wagesfuneralhome.com. Tom M. Wages Funeral Service, A Family Company, 3705 Highway 78 West, Snellville, GA 30039 (770-979-3200) has been entrusted with the arrangements.

Farran Lorraine Davis, age 32 of Stone Mountain, GA, passed away on Saturday, December 18, 2021, at Our Lady of Perpetual Help Home in Atlanta, GA, after a courageous battle against cancer. Farran was born in Woodbridge, VA, and grew up in... View Obituary & Service Information

The family of Farran Lorraine Davis created this Life Tributes page to make it easy to share your memories.

Send flowers to the Davis family.