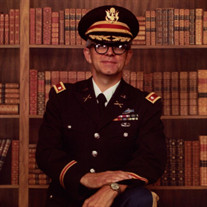 LTC Edward C Seufert (USA Retired), passed away on Palm Sunday, March 28, 2021, at age 87 in Decatur, GA. He was born on Easter Sunday, April 16, 1933 in Newark, NJ to the late Edward William Seufert and Dorothy Mussehl Seufert. He is survived by his wife of 57 years, Shirley Ann Pratt Seufert. They were married in Parsons, Tennessee on October 20, 1963. He is also survived by his brother, Gary Seufert; his sister, Suzanne DuBois; his son, Edward Roy Seufert; his daughter, COL Jan Seufert (USA Retired); and two granddaughters, Sophia and Annaleah Seufert. Ed grew up in Nutley, NJ where he developed a love of the outdoors while participating in the Boy Scouts ultimately earning his Eagle Scout. Throughout much of his life he continued to volunteer with the Boy Scouts and received the God and Service Medallion (the highest award given in the Methodist Church for Scouts). Ed was commissioned as a Second Lieutenant in the US Army in 1955 after graduating from the University of Maine with a degree in Forestry. He retired after twenty years of service and retired as a Lieutenant Colonel. While in the Army he graduated from the US Army Ranger School, served as an advisor in the Vietnam War and was stationed in Germany. Ed and Shirley met at Fort Benning while he was attending the Infantry Officer Advanced Course and they were married just a few months later. Once he retired from the Army he pursued his passion for reading earning a Master’s in Library Science from Peabody College in Nashville, TN. He then began a second career as the Head Librarian for Lindsey Wilson College where he also taught a course on Children’s Literature. He retired in 1999. Ed and Shirley moved to Atlanta in 2005 to be closer to their grandchildren. Ed loved to read and most people who knew him saw him with a book in his hand or a stack of books by his chair. He was a wonderful baker and loved to make cakes for special occasions like his granddaughters’ birthday. The family always looked forward to tasting his delicious creations. He loved watching birds and recording what birds he encountered. He was an active member of the Oak Grove United Methodist Church in Decatur, GA and taught Sunday school for many years. He loved watching his granddaughters perform in musicals and dance productions and he was so proud of them and the accomplishments of his children, Ed and Jan. In the last months of his life, he struggled with reading because of his illness so he got great joy watching many programs on Georgia Public Television. Throughout his life, he always supported public broadcasting and enjoyed so much of their programming. In lieu of flowers, memorial donations may be made to Georgia Public Broadcasting (https://www.gpb.org/support), in the comment section just mentioned that the gift is in memory of Edward C Seufert. A memorial service will be held on Saturday, May 15, 2021 at 11:00 AM at Oak Grove United Methodist Church, Decatur, Georgia. Condolences may be sent or viewed at www.wagesfuneralhome.com. Tom M. Wages Funeral Service, A Family Company, 3705 Highway 78 West, Snellville, GA 30039 (770-979-3200) has been entrusted with the arrangements.

The family of LTC Edward C. Seufert (USA Retired) created this Life Tributes page to make it easy to share your memories.