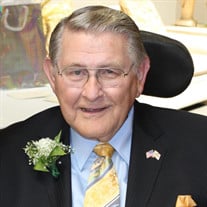 Reverend Dr. Jack Allen “Big Daddy” Hanberry, of Lilburn, Georgia was born on June 2, 1936 in Denmark, South Carolina to Hurlbut D. and Adelle Hanberry. Gerry and Nell were his siblings, also born to that union. After high school, he received a scholarship and played football while attending Furman University in Greenville, South Carolina, receiving a Bachelor’s degree in Psychology. He felt the call into the ministry and continued his education by attending the New Orleans Baptist Theological Seminary, where he met his sweetheart, Barbara. After attaining his Masters of Divinity degree, he began what was to be a 25-year career with the Federal Bureau of Prisons. His first assignment was at the Denver, Colorado Correctional Institution, where he served as Chaplain. Their son, Scott, was born while there. After spending less than a year there, he was transferred to the Tallahassee, Florida Correctional Institution, where he also served as Chaplain. It was there that their daughter, Cindy was born. He then transferred to Atlanta, Georgia to serve as Chaplain of the Atlanta Federal Penitentiary. After a time there, he was transferred to Leavenworth, Kansas, where he served as Chaplain for the Leavenworth Federal Penitentiary and then ultimately the Chief of Chaplains for the Bureau of Prisons. While there, he also attended Luther Rice Seminary in Jacksonville, Florida attaining his Doctorate degree in Theology. After being asked many times by the Director of the Bureau of Prisons, he accepted an assignment as the Associate Warden of the Texarkana, Texas Correctional Institution becoming the first Chaplain to become a Warden with the Bureau of Prisons. After only serving there for 9 months, he transferred to serve as the Associate Warden of the Milan, Michigan Correctional Institution. In 1978, he returned to Atlanta, Georgia, in what would be his final move with the Bureau of Prisons, to become the youngest Warden to ever serve at the Atlanta Federal Penitentiary. Because of his accomplishments there, he remained in that position until his retirement in 1986. He received an honorable discharge from the United States Army, where he served in the National Guard. Over these years, he was given many awards and accolades, more than can be numbered. He was ordained into the ministry early on and has served bi-vocationally, in churches in each of the areas of the country, where he has been assigned. After retirement, he enjoyed opening a restaurant in Covington, Georgia that he maintained for several years, which was always a dream of his. After surviving a major stroke in 2001, he was rendered to a wheelchair. His grit, determination, and love for life allowed him to continue with as normal a life as he could. In recent years as his mind began to fail, he remained the gentle giant of a man that he was, so graceful and loving. His eyes lit up when any of his family came by to see him. He has touched so many lives over these years and has now been rewarded with jewels in his crown, promised by the Lord who he served. For the past 3 years, Jack and Barbara have resided at Sunrise Five Forks Senior Living, in Lilburn, Georgia, where the staff has fallen in love with them and have cared for them in an unbelievable manner. The restrictions of the pandemic of 2020 were tough as those who lit up his eyes didn’t get to interact with him as much. On January 21, 2021 at approximately 5:07 PM, with his loving wife of 60 years along with his son and daughter by his side, Jack stepped out of his wheelchair for the first time in 20 years and into the presence of his Lord and Savior, where he quickly heard, “well done thy good and faithful servant”. Thank you to Agape Hospice for their loving support during these final days. Thank you also to the ongoing ministry of Yellow River Baptist Church, Lilburn, Georgia, where Jack and Barbara hold their membership. Jack was predeceased by his parents, Hurlbut and Adelle Hanberry; and his sister, Nell Hightower. His brother, Gerry resides in Fredericks, Maryland. He is survived by his wife, Barbara W. Hanberry; his son, Scott Hanberry [Kimberly] of Grayson, Georgia; and his daughter, Cindy Dunham [Gerry] of Monroe, Georgia. He is also survived by his grandchildren; Dr. Brad Hanberry [Brittany] of Lilburn, Georgia, Brock Hanberry [Amber] of Boston, Georgia, Lauren [Blake] Williams of Lilburn, Georgia, Blake Dunham [Julia] of Monroe, Georgia and Peyton Dunham of Monroe, Georgia. Great-grandchildren include; Ella Rae Hanberry, Colton Hanberry, Stone Hanberry, Sonny Hanberry, Savannah Williams, Chloe Williams and Stella Dunham. The family will receive friends at Tom M. Wages Funeral Services on Sunday, January 24, 2021 from 3:00 PM 6:00 PM. Additional visitation will be held on Monday, January 25, 2021 at 10:00 AM, just prior to the 11:00 AM service at Rehoboth Baptist Church located at 2997 Lawrenceville Highway, Tucker, Georgia, with Tommy Crider and Kevin Creasman officiating. Interment will follow at Floral Hills Memory Gardens, directly across from Rehoboth Baptist Church. In keeping with COVID restrictions, masks will be required at all venues with social distancing followed. As much as we would love to and as sad as it makes us, we will be refraining from hugs and kisses. Just know that we love and thank you for your love and support. In lieu of flowers, those desiring may make donations may make Bible donations to Gideon’s International at https://www.sendtheword.org. Condolences may be sent or viewed at www.wagesfuneralhome.com. Tom M. Wages Funeral Service, A Family Company, 3705 Highway 78 West, Snellville, GA 30039 (770-979-3200) has been entrusted with the arrangements.

The family of Dr. Jack A. Hanberry created this Life Tributes page to make it easy to share your memories.

Send flowers to the Hanberry family.