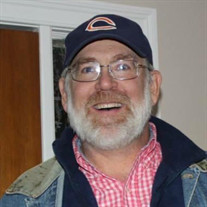 To view the service of Don via Livestream, please click on the blue hyperlink https://view.oneroomstreaming.com/authorise.php?k=1646269890170314 Donald Alan Graff, 64, of Lawrenceville passed away peacefully at his home on Monday, February 28, 2022 of natural causes. Don was preceded in death by parents Donald H. and Sara Ann Graff (nee Walsh) and sister Mary Beth Graff. Don is survived by his children Nina Celeste Graff and Nicholas Edward Graff; ex-wife and friend Sandi O’Toole; siblings Susan Graff McCarthy (Joe), Lynn Graff Thomas (Michael), James Graff (Laura), and Michael Graff (Angela); and seventeen nieces, nephews, great-nieces and nephews. Born in Chicago, Don was raised in Arlington Heights, IL and lived most of his adult life in Lawrenceville, GA. Always extremely committed to his community, Don was an active member of Unitarian Universalist Congregation of Gwinnett (UUCG) for 30 years. He spearheaded countless projects at the church, often coming to toil on the grounds before and after work parties (or circumventing them entirely). Additionally, he organized the formation of Boy Scouts of America, UUCG Chapter, troop #99 and served as Scoutmaster for four years. Don was a master carpenter, licensed electrical contractor, and home inspector. In his younger years, he was an Eagle Scout and served in the Navy as Photographer’s Mate of the USS New Orleans, stationed in San Diego, CA. A loyal Deadhead, he loved motorcycles, the Chicago blues music scene, learning about and discussing history and politics, and doting on his two wonderful children. In his spare time, Don did as much as he could for others and loved making himself useful to anyone in need (whether they knew it or not). In lieu of flowers, memorial donations may be made to American Foundation for Suicide Prevention (AFSP). Condolences may be sent to and viewed at www.wagesfuneralhome.com. Funeral services for Don will be held at the Tom M. Wages Lawrenceville Chapel with visitation from 2-4pm, followed by the service at 4-6pm. Condolences may be sent or viewed at www.wagesfuneralhome.com. Tom M. Wages Funeral Service, 120 Scenic Hwy. Lawrenceville, GA 30046 (770-963-2411) has been entrusted with the arrangements.

To view the service of Don via Livestream, please click on the blue hyperlink https://view.oneroomstreaming.com/authorise.php?k=1646269890170314 Donald Alan Graff, 64, of Lawrenceville passed away peacefully at his home on Monday, February 28,... View Obituary & Service Information

The family of Don Graff created this Life Tributes page to make it easy to share your memories.

To view the service of Don via Livestream, please click on the...

Send flowers to the Graff family.