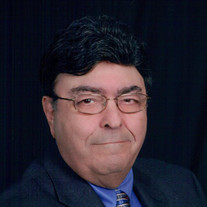 Dominick F. Cirillo, age 79, of Lawrenceville, GA passed away on Monday, June 7, 2021. He is survived by his loving wife of 57 years, Sandra “Sandy” Cirillo; son, Christopher Cirillo (Marianne); grandchildren, Alyssa Davis (Easton), Noah Cirillo, Jonah Cirillo; brother, Robert Grosso (Gale); sister-in-law, Deborah Kennedy; as well as several nieces, nephews, cousins, and friends. He was preceded in death by his son, Patrick Anthony Cirillo and parents, Dominick Cirillo and Anne DeMore Maracle. Dominick grew up in Syracuse, NY and attended Syracuse University where he earned his Bachelor of Science in Mathematics. He then attended Rutgers University and Stevens Institute where he obtained his Master’s degree in Computer Science. He was a serial Entrepreneur and was always thinking of his next business adventure. Dominick was a member of Prince the Peace Catholic Church and had a very deep faith and a strong love for the Lord. He enjoyed reading and in his free time you could find him with his Bible or a philosophy book in hand. Dominick was a loving husband, father, and grandfather who took great pride in his family. Dominick was a special man who had an amazing heart. He was the biggest giver and helper to everyone and didn’t ever want or take credit for his generosity. A funeral mass honoring the life of Dominick will be held on Saturday, June 12, 2021 at 2:00pm at Prince of Peace Catholic Church in Flowery Branch with Fr. Eric Hill officiating. The family will receive friends Friday, June 11th from 6:00pm-9:00pm at Tom M. Wages Lawrenceville Chapel. Those desiring may make memorial donations to St. Jude’s Children’s Research Hospital or St. Vincent DePaul Society. Condolences may be sent to or viewed at www.wagesfuneralhome.com. Tom M. Wages Funeral Service LLC, “A Family Company”, 120 Scenic Hwy Lawrenceville, GA, 770-963-2411, has been entrusted with the arrangements.

The family of Dominick F. Cirillo created this Life Tributes page to make it easy to share your memories.

Send flowers to the Cirillo family.