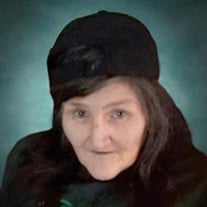 HICKS– Frances “Dianne” Brown Hicks, age 73, of Monroe, Georgia, died on Monday, April 25, 2022 at Piedmont Walton Hospital in Monroe. She was preceded in death by her husband of 20 years, Frederick Arlander Hicks, Sr. in 1987. She is survived by her seven children; Amy Louise Brazell of Winder, GA, Frederick Arlander “Freddie” Hicks, Jr. (Terri) and Frances Rose Mae Hicks all of Warner Robins, GA, Sallie April Cochran (Daniel) of Mt. Airy, GA, Joshua Quintin “Bodidle” Hicks of Monroe, GA, Lillie Naomi Cain (Randy) of Monroe, GA and Roman Patrick Hicks (Cathryn Wallis) of Winder, GA; two sisters, Edith Brown of Griffin, GA and Patricia “Patty" Brazell of Pembroke, GA; brother, Johnny Brown of Griffin, GA; 15 grandchildren; Katie Reynolds, Kelly Hicks, Freddie Hicks, Melissa Hicks, Kenneth Veamoi, Danielle Hicks, Kristina Brown, John Henry Veamoi, Dixie Michelle Veamoi, Devon Jones, Savannah Leadford, Alexis Cochran, Quintin Cain, Austin Cain and Jacob Hicks; 9 great grandchildren; Christopher Lamb, Caroline Johnson, Malichi Hicks, Jesse Hicks, Lerve Hicks, Madee Hicks, Winter Hicks, Hunter Lucas, and Knox Brown; nieces, nephews, great nieces, great nephews, other relatives and a host of friends. Mrs. Hicks was also preceded in death by her parents, John Clayton Brown and Frances Deleye Mae Morgan Brown; two children, Howard Clayton Hicks and Peggy Juanita Hicks; brother, David Brown and sister, Jennifer Brown. Mrs. Hicks was born in Fulton County, Georgia, (Cabbagetown) on October 19, 1948. She grew up in Lilburn/Alpharetta, Georgia area where she attended the former Lilburn High School and married Freddy Hicks in 1967 and had 20 years of marriage until his death in 1987. She worked as a Teacher’s Aide and served as a Candy Striper at the Walton County Hospital. While living in the Atlanta area she was an employee at one of the first Krystal restaurant. In the late 70’s, Dianne and her son Freddie were cast in a movie, “The Sheriff and The Satellite Kid” that was filmed in Walton County. Dianne loved Jesus, her family, and cooking for people. She always opened her home to her children and their friends. She enjoyed dancing so much and taught her children how to dance when they were little just dancing around the house. Walks in the woods and watching her soap operas between 1pm to 5pm made her happy. Her children knew not to interrupt her during her soap operas. She ruled with a strong hand but worried about everyone. She could always tell you what the weather was going to be for the day and would even call members of her family to let them know if there was going to be rough weather in their area. She also would call people on their birthday to make sure they knew someone was thinking about them. She never forgot anything and always supported her family during the good times and the bad times. She is going to be deeply missed by her loving and committed family. The Service to Honor and Celebrate the Life of Dianne Brown Hicks will be held on Saturday, April 30, 2022, at 2:00 P.M. at Tom M. Wages Lawrenceville Chapel with Pastor Billy Angel officiating and Shared Memories by the Family. Interment will follow at Friendship Primitive Baptist Church Cemetery. The family will receive friends on Friday, April 29th, from 3:00 P.M. to 9:00 P.M. and on Saturday after 8:30 A.M. until the hour of the service at the funeral home. In lieu of flowers, Dianne would want donations to be made to handle her service arrangements. Condolences may be sent or viewed at www.wagesfuneralhome.com. Tom M. Wages Funeral Service, 120 Scenic Highway, Lawrenceville, GA 30046 (770-963-2411) has been entrusted with the arrangements.

The family of Dianne Brown Hicks created this Life Tributes page to make it easy to share your memories.

Send flowers to the Hicks family.