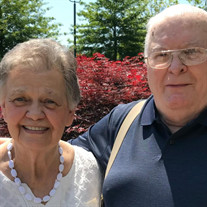 Delano Dale Getz, “Del” 88 and Jeanetta Esther (Faust) Getz “Netta” 86 known to so many as Nana and Pop of Buford, GA entered God’s kingdom, Netta on February 8th and Del on April 1st. They were married for 67 years. Both devout children of God, Del and Netta attended First United Methodist of Lawrenceville for over 48 years. They were married in 1954 and had two children: Kimberlee Ann Moyer and Delano D. Getz, II. Both Del and Netta were born and raised in PA. They were preceded in death by their parents, Edward and Ada Viola Getz, Elizabeth and Harvey Faust and their siblings, Gerry Getz; Ann Kauffman and Morgan Faust. They are survived by Netta’s sister, Esther Ruth Erdossy, brother in law, Bob Erdosssy, their two children Kim Moyer and Del Getz and their spouses, John Moyer and Dodi Getz. They were blessed to have 5 grandchildren, Jason Moyer and his wife Amy; Gwenn Dando and her husband Will; Justin Moyer and his wife Emma; Trey Getz and Cody Getz and his wife Katherine and 8 great grandchildren, Monica, Jackie, Skyler, William, Gentry, Sutton, Libby, Beckham, and Harper. Del served our country in the Marine Corp. He retired from Air Products and Chemicals after 37 years of service. After retirement he drove for Family Promise. He was an avid hunter and fisherman and loved to play cards, he always loved to tell jokes and usually greeted you with one! Netta was the sweetest lady and she had the sweetest voice. She found so much joy in singing at weddings, in the choir, and with her family. She also loved to dance and would dance anytime she had an opportunity, especially with her grandchildren. Everyone she came in contact with fell in love with her. She was one of a kind and was loved by so many. They were wonderful parents, grandparents, and friends and will dearly be missed here on earth. A joint memorial service to celebrate the lives of Del and Netta will be held on Friday, April 8, 2022 at 11:00 AM at Tom M. Wages Lawrenceville Chapel Condolences may be sent or viewed at www.wagesfuneralhome.com. Tom M. Wages Funeral Service, 120 Scenic Hwy., Lawrenceville, GA 30046 (770-963-2411) has been entrusted with the arrangements.

The family of Delano Dale Getz created this Life Tributes page to make it easy to share your memories.

Send flowers to the Getz family.