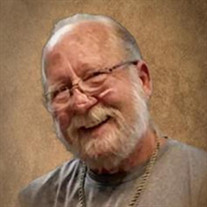 Darrell Henderson, age 72, of Auburn, Georgia died on Friday, February 11, 2022 at his home surrounded by his family after his journey with lung cancer. He is survived by his loving wife of 33 years, Freda Harris Henderson; three daughters, Celeste Henderson of Dacula, GA, Kimberly Smith (David) of High Falls, GA, and Donna Guy of Blairsville, GA; 9 grandchildren; Kevin Panter, Wesley Panter, Dana Lentz (Chad), Aaron Forrester (Meshae Barton), Kennedy Forrester, MA3 Hunter Turner, U.S. Navy, Emily Turner, Lily Turner and Caleb Casco; 5 great grandchildren, Joshua, Maggie, Colton, Cylie and Celsie; 2 brothers, Leon Henderson (Phyllis) and Hugh Henderson (Burma) all of Buford, GA; numerous nieces, nephews, other relatives and a host of many friends that he loved so much. Darrell was preceded in death by his parents, Fred I. Henderson and Kathryn Wigley Henderson Duncan; son, Jason Thomas. Darrell was born on September 12, 1949 in Buford, Georgia and was a 1967 graduate of North Gwinnett High School. He was drafted into the United States Army where he served as a cook with the rank of PVT E-1. Darrell worked for General Motors exactly 30 years to the day. GM told him he could retire or work longer and get more money. He called Freda wanting to know if they could make it if he retired. Of course, she told Darrell that they would be fine. He was 49 years old. Darrell worked at Lowe’s for a while to pass the time. He then went to work for Magna Steyr (part of General Motors) and retired from there in 2002. To say Darrell loved cars is an understatement. His first car club was the Dixie Cruisers where he served as Vice President. He was a former member and Director of the American Street Rodders in Hoschton. He enjoyed so much working on cars. He built his own 1955 Chevy. Darrell and Freda built their own garage but Darrell made Freda stop helping because she hung the shingles crooked. Darrell also loved watching car races, basketball, baseball and football. He loved the Georgia Bulldogs. Freda would be on the sun porch and Darrell watching sports on the big TV. They would yell back and forth to each other…Freda watching old movies and Darrell watching his sports. Freda washed the clothes and Darrell would dry them and put them up. She cooked and Darrell did dishes. They were home-bodies. Darrell had a heart attack and Freda would not let him go back to work. So, he worked in the yard, even keeping the grass cut at the entrance to the subdivision. Freda said “he saved her life when they got married on January 11, 1991. He was the perfect man and companion. He treated me like a baby.” When Freda’s son Jason got killed in a car wreck, Darrell took care of Freda completely. Freda said that her daughter, Kimberly, came home from school and told Darrell that she wanted him to adopt her and Darrell didn’t even have to think about it for one minute. He said yes right away. Darrell had his journeys in life but became a devoted husband, father, grandfather, great grandfather and special friend. He will be deeply missed by his adoring family and devoted classic cars buddies. Due to the current COVID-19 regulations, and different variants, our staff is committed to taking care of the families we serve and the friends who support them. We ask all family members and friends attending the visitation and service, to please continuing social distancing and bring & wear a mask as you feel incline. A Graveside Service to Honor and Celebrate the Life of Darrell Henderson will be held on Monday, February 14, 2022 at 2:00 P.M. at Hillcrest Cemetery, off Little Mill Rd., Buford, GA 30518 with Military Honors and Pastor Danny Newbern officiating. The family will receive friends on Sunday, February 13th from 2:00 P.M. to 8:00 P.M. at the funeral home. In lieu of flowers, Darrell would want gifts to be made to his beloved wife, Freda. Condolences may be sent or viewed at www.wagesfuneralhome.com. Tom M. Wages Funeral Service, 120 Scenic Highway, Lawrenceville, GA 30046 (770-963-2411) has been entrusted with the arrangements.

Darrell Henderson, age 72, of Auburn, Georgia died on Friday, February 11, 2022 at his home surrounded by his family after his journey with lung cancer. He is survived by his loving wife of 33 years, Freda Harris Henderson; three daughters,... View Obituary & Service Information

The family of Darrell Henderson created this Life Tributes page to make it easy to share your memories.

Send flowers to the Henderson family.