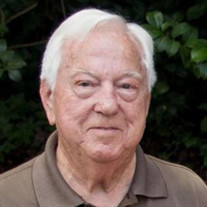 Cleties Howard Crowe age 86 passed away on December 24, 2020. He was born November 11, 1934 to Cleties and Alice Scott Crowe in Toccoa, GA. He was a 1953 graduate of Toccoa High School. He graduated from Piedmont College with a BS in chemistry. During college, he worked as a lab technician with Snyder Bros Paint Co. After college, he served six months active duty in the Army. He married Rachel Watkins and was employed as an auditor with Georgia Power Co. After three years, he had the opportunity to re-enter the paint industry first as a chemist, then in sales. His mantra was “If I can make it for someone else I can make it for myself”. In 1980 he started his own paint manufacturing company with his business partner, Rachel, making paint and powder coatings for the industrial market. He earned his private pilot’s license and through the years had three planes. He enjoyed travel and had many varied experiences like flying a float plane in Alaska, snorkeling with stingrays in Tahiti, climbing a volcano in Iceland, visiting the Sistine Chapel in Vatican City, going to the top of the Eiffel Tower, just to name a few. He is survived by his wife of 63 years, Rachel, son Mark, son Scott and his Best Friend Kelly, their son Chandler and wife Maria and their daughter Leila, son Jeff and his wife Kim, their son John and his wife Kelie, their son Aaron and his wife Elyse, their son Cameron and his partner Lucy, their daughter Aurora, his son Tristan, her children Eden and James. He is also survived by his sister, Barbara Yancey and several nieces and nephews. A Graveside service will be held at a later date. Please no flowers. Instead, give some flowers to someone special in your life. Condolences may be sent or viewed at www.wagesfuneralhome.com. Tom M. Wages Funeral Service, LLC, “A Family Company,” 120 Scenic Highway, Lawrenceville, GA 30046 (770-963-2411) has been entrusted with the arrangements.

Cleties Howard Crowe age 86 passed away on December 24, 2020. He was born November 11, 1934 to Cleties and Alice Scott Crowe in Toccoa, GA. He was a 1953 graduate of Toccoa High School. He graduated from Piedmont College with a BS in chemistry.... View Obituary & Service Information

The family of Cleties Howard Crowe created this Life Tributes page to make it easy to share your memories.

Send flowers to the Crowe family.