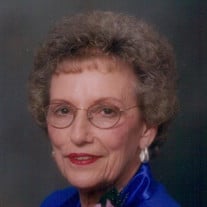 Cleff Doris Thompson Mays, age 93, went home to be with her Lord and Savior on January 24, 2021. She was born on May 30, 1927 in Lawrenceville, GA. She was the daughter of Alvin and Eunice (Bramblett) Thompson. She worked at the CDC-Malaria control during war time. She later retired with Gwinnett County Public Schools where she was a secretary at Bethesda Elementary school for 27 years. She graduated at the same location when it was Bethesda High School in 1944 where she was the valedictorian of her class. She played center-forward on the state champion Bethesda High School basketball team. She was a faithful member of the Bethesda United Methodist Church in Lawrenceville. She was the pianist/organist for Bethesda UMC for 74 years. Cleff had a traveling music folk group called “God’s Children” in the 60’s and 70’s. Cleff was preceded in death by her loving husband of 60 years, Joe Mays. They were the first couple to get married at Bethesda UMC in 1946. She is survived by her sons and daughters-in-law, Danny and Rhonda Mays, Stan and Sheila Mays; granddaughters, Rachel Mays, Heather Bland, April Bryson- Mays, and Ramsey Sinclair; grandson, Joey Mays, Andy Mays and Heath Sinclair; great grandchildren, Patrick and Morgann Bland, Melody Mays, Memphis Beard, Benjamin Sinclair and Henry Meeker; brother, Wendell Thompson, as well as several nieces, nephews, and cousins. She is also preceded in death by her siblings, Ralph Thompson, Gerald Thompson, Neal Thompson, Jeanette Anderson, Carolyn Simpson and Hazel Samples. Cleff will be remembered as a loving and devoted wife, mother, grandmother, great-grandmother and a friend to many. A graveside service honoring the life of Cleff will be held for IMMEDIATE FAMILY ONLY on Thursday, January 28, 2021 at 1:00 P.M. at Bethesda UMC Cemetery. In the Spring the family will hold a memorial service in her honor at the church. In lieu of flowers, the family requests memorial donations be made to the Bethesda UMC Cemetery Fund 444 Bethesda Church Road Lawrenceville, GA 30044 Condolences may be sent or viewed at www.wagesfuneralhome.com. Tom M. Wages Funeral Service, A Family Company, 120 Scenic Hwy Lawrenceville, GA 30046 (770-963-2411) has been entrusted with the arrangements.

Cleff Doris Thompson Mays, age 93, went home to be with her Lord and Savior on January 24, 2021. She was born on May 30, 1927 in Lawrenceville, GA. She was the daughter of Alvin and Eunice (Bramblett) Thompson. She worked at the CDC-Malaria... View Obituary & Service Information

The family of Cleff Mays created this Life Tributes page to make it easy to share your memories.

Cleff Doris Thompson Mays, age 93, went home to be with her Lord...

Send flowers to the Mays family.