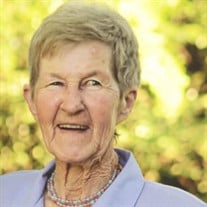 A Tribute to Claire Nowling Claire W. Nowling, age 87, left this world on March 23, 2021. She was born December 2, 1933 in Petaluma, California to Adolf and Laura Wohlers. Claire was a special and memorable lady. She grew up on a chicken farm and had vivacious stories to share from her youth – like taking the bus into San Francisco and the time she skipped school with a date that took her on a crop duster airplane! While attending Santa Rosa College, she met a Navy man she would eventually marry. Clyde and Claire eloped in Reno on August 3, 1952 and she became a military wife. They lived all over the country, including Florida, New Jersey and Texas. She was a strong and caring woman – taking in Clyde’s stepsister for a couple years early in their marriage and then raising her own two children, often alone while her husband was serving overseas. She was stubborn and independent, even getting a secret job during one of Clyde’s tours of duty. After retiring to Andalusia, Alabama in 1974, Claire lived a simple life and could be counted on for a laugh or a helping hand. And no matter how many times she was knocked down, she was resilient, sarcastic, and rarely complained. She was a long-time volunteer at the Andalusia Hospital, where her daughter also worked. She became a fun and supportive grandmother, offering her services as 1-800-GRANDMA if her grandchildren found themselves in trouble. Her advice to her grandchildren and great-grandchildren: Stand up for yourselves and help others. Claire is survived by her son and daughter-in-law, Jeff and Becky Nowling; grandchildren, Ped Aaron Hunt (Julie), Jeffrey Hunt (Katherine), Laura Harper (Michael), Stephanie Berrier (Stephen) and Michael Nowling; and her many great-grandchildren, nieces, and nephews. She was preceded in death by her parents; her husband, Clyde Nowling; daughter, Patricia Hunt (Ped); and brothers, Richard (Sheila) and Stanley (Gayle) Wohlers. She loved them all. Per Claire’s request, there are no services planned at this time. In lieu of flowers, memorial donations may be made to the non-profit of your choice, especially those benefiting veterans and military families. Condolences may be sent or viewed at www.wagesfuneralhome.com. Tom M. Wages Funeral Service, A Family Company, 3705 Highway 78 West, Snellville, GA 30039 (770-979-3200) has been entrusted with the arrangements.

A Tribute to Claire Nowling Claire W. Nowling, age 87, left this world on March 23, 2021. She was born December 2, 1933 in Petaluma, California to Adolf and Laura Wohlers. Claire was a special and memorable lady. She grew up on a chicken... View Obituary & Service Information

The family of Claire W. Nowling created this Life Tributes page to make it easy to share your memories.

A Tribute to Claire Nowling

Send flowers to the Nowling family.