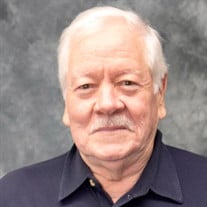 Charles Jeffery Winn, Sr., 74, went home to be with his Lord and Savior Jesus Christ on June 21, 2021 at Presbyterian Kaseman Hospice in Albuquerque, New Mexico. Born April 27, 1947 in Augusta, Georgia, he was the son of James Beauchamp Winn, Sr. and Katheryn Cecil Rose. He graduated class of 1965 from Morristown High School in Tennessee. After graduating he married his first wife, Teresa Ann Penland (McIntyre) and they had his first son, Charles Jeffrey Winn, Jr. Jeff attended the University of Tennessee until he enlisted in the US Army during the Vietnam War in 1970. He and Terri divorced, and he was stationed in Aschaffenburg, Germany. In this season of life, Jeff battled depression and alcohol abuse until a friend, James Thomas Ashcraft, lovingly confronted him and shared the Good News of salvation in Jesus Christ. Jeff repented of his sins and fully surrendered his life to Christ, and immediately he was set free from the bondage of alcohol and was filled with the joy of the Holy Spirit. In 1974 he met and married Carol Anne Battaglia (Schantz). Jeff and Carol soon thereafter moved to Washington, D.C. where he was stationed as a pharmacy technician at Walter Reed Army Medical Center. Jeff’s second and third sons, James Thomas Winn and Jonathan David Winn were born in D.C. and the family lived in Maryland for many years. Jeff retired from the Army in 1987 and later worked as a civilian at Bethesda Naval Hospital in the Hematology/Oncology unit. In 1998 he remarried Charlotte Ruth Baker. Jeff and Char moved to Snellville, GA where he continued his work in pharmacy at St. Joseph’s Hospital of Atlanta. After 3 sweet years of marriage, Char died of cancer and went home to Jesus in 2001. Jeff remarried Julie Baldwin in 2007 and moved to Dawsonville, GA. Jeff moved to Maryville, TN in 2013 and he and Julie divorced in 2019. In June 2019, Jeff moved out west to live with his son and daughter in law, Jonathan and Alyssa Winn, in Albuquerque, NM. There he enjoyed precious memories with his grandchildren and savored the beauty of the southwest. Throughout his life, Jeff was admired and cherished for his devotion to family, patriotism, love for animals, servant’s heart, generosity, strong work ethic, and gentle spirit. Though he faced many trials in his life both physically and emotionally, Jeff never wavered in his faith and persevered in entrusting his life to Jesus. From the moment of receiving the shocking news of cancer to his dying breath, Jeff expressed gratitude to all who cared for him, shared about Christ, and calmly faced death with courage and hope. He fought the good fight, he kept the faith, and he has finished the race. His treasure is in heaven, where we look forward to seeing him again. Jeff is survived by his sister, Carolyn Rose Winn; brother, James Beauchamp Winn, Jr; sons, Jeff Winn, Jr., Jim Winn (Tessa), Jonathan Winn (Alyssa); grandchildren, Jeffrey, Jonathan, Hannah, Autumn, Eliana, Talia, Josiah, JT, Bennett, and Evelyn. A graveside service honoring the life of Charles will be held on Tuesday, June 29, 2021 at 2:00pm at East Shadowlawn Memorial Gardens. The family will receive friends on Tuesday, June 29th from 1:00pm-2:00pm at Tom M. Wages Lawrenceville Chapel. Condolences may be sent to or viewed at www.wagesfuneralhome.com. Tom M. Wages Funeral Service LLC, “A Family Company”, 120 Scenic Hwy Lawrenceville, GA, 770-963-2411, has been entrusted with the arrangements.

Charles Jeffery Winn, Sr., 74, went home to be with his Lord and Savior Jesus Christ on June 21, 2021 at Presbyterian Kaseman Hospice in Albuquerque, New Mexico. Born April 27, 1947 in Augusta, Georgia, he was the son of James Beauchamp Winn,... View Obituary & Service Information

The family of Charles Jeffery Winn Sr. created this Life Tributes page to make it easy to share your memories.

Send flowers to the Winn family.