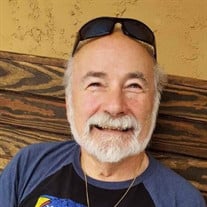 CHARLES W. RINALDO Loving Husband, Brother, Father, and Grandfather Charles W. Rinaldo, age 79, passed away peacefully at this home in Grayson, GA, on December 31, 2020. Chuck or "C.W." as he was known to most, was born May 20, 1941, in Elizabeth, NJ, and is predeceased by his parents, Anthony D. Rinaldo, Sr., Esq. and Emilie Rinaldo. Chuck is survived by his wife, Janice S. Rinaldo; children: Anthony J. Kuiper (Nicole E.), Noel A. Kuiper Glenn (A. Tyler) and Sarah Rose Rinaldo; five grandchildren: Caleb, Eli, Shiloh, Remington and Madelyn; his brothers: Matthew T. Rinaldo, Esq. (Sherry) and Anthony D. Rinaldo, Jr., Esq. (Lee) and many nieces and nephews. Chuck was a graduate of Thomas Jefferson High School in Elizabeth where he played varsity football and wrestling. After graduation he worked as a sous-chef and head chef at his parents' restaurant, The Bavarian Room, in Elizabeth. He served as a lifeguard at Manasquan Beach and enjoyed racing his ’63 Corvette as a member of the Jersey Corvette Club in his youth. In 1964 Chuck moved to Atlanta, Georgia, where he completed his education at Georgia State University earning a Bachelor of Arts degree in 1970. He continued in the food and beverage industry serving as Asst. Manager of the Atlanta Hyatt Regency Hotel, Manager of the Playboy Club, longtime owner of C. W. Shaw’s Restaurant and Night Club and co-owner of Baker Street Night Club in Atlanta where many bands were showcased and got their start. He also became a travel manager for the Southern rock band Lynyrd Skynyrd for a period of time and was a Trustee of the Freebird Foundation in honor of Ronnie Van Zant. Chuck worked with numerous bands, including the Atlanta Rhythm Section, Kansas and Georgia Satellites. Chuck returned to Elizabeth, NJ, and worked as the Office Manager at the Rinaldo Family Law Firm from 1987 to 1991. Chuck and Janice were avid motorcyclists, members of the GA Sidecar Club and attended many Daytona and other racing events. Chuck bred and raised champion Palomino Saddlebred horses at his farm in Dacula, GA, and was President and National Director of the Georgia Palomino Association for many years until his retirement. He will be greatly missed by his many friends and relatives. A visitation will be held at Tom M. Wages Funeral Home in Lawrenceville, GA on January 3, 2021, from 4:00 – 6:00pm and a funeral mass at St. Lawrence Catholic Church in Lawrenceville on January 4, 2021, at 2:00pm. Memorial Services will be held in New Jersey at a later date to be announced, and he will be interred at the Bertolet Burying Ground in Upper Fredrick, Montgomery County, PA. Condolences may be sent or viewed at www.wagesfuneralhome.com. Tom M. Wages Funeral Service, LLC, “A Family Company,” 120 Scenic Highway, Lawrenceville, GA 30046 (770-963-2411) has been entrusted with the arrangements.

CHARLES W. RINALDO Loving Husband, Brother, Father, and Grandfather Charles W. Rinaldo, age 79, passed away peacefully at this home in Grayson, GA, on December 31, 2020. Chuck or "C.W." as he was known to most, was born May 20, 1941, in Elizabeth,... View Obituary & Service Information

The family of Charles "Chuck" Rinaldo created this Life Tributes page to make it easy to share your memories.

Send flowers to the Rinaldo family.