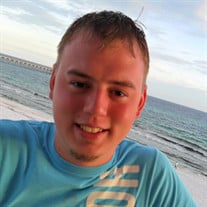 Charles Neal McCown born on April 7, 1990 of Lawrenceville GA passed away unexpectedly on Sunday September 19, 2021, after losing his battle to depression. He lived his life for others, especially his 2 sons Liam and Luke McCown. He took pride... View Obituary & Service Information

The family of Charles Neal McCown created this Life Tributes page to make it easy to share your memories.

Send flowers to the McCown family.