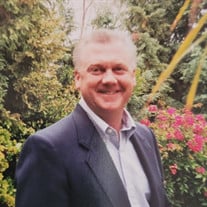 Charles David “Dave” Gillespie, age 65, died peacefully in his sleep at his home in Hoschton, GA early Sunday morning, 15NOV2020, after a valiant effort to recover from a stroke and traumatic brain injury. Dave is survived by his wife, Dorothy Ann, his daughter, Megan Christine, and his granddaughter, Savanna Marie. He also leaves behind his brother, Jeffery (wife, Jane); his nephew, Destin (wife Casey); and many close relatives and friends. Dave was born on 20SEPT1955 at Crawford Long hospital in Atlanta, GA to Curtis and Betty Jo (Harp) Gillespie. He attended Toney Elementary where he was taught to “drink your milk at Toney so you won’t grow up to be boney”, as a child, he enjoyed biking, swimming, and diving while growing up in beautiful Decatur, GA. He graduated from Columbia High School in 1973. He and his family attended Mount Carmel Christian Church where Dave experienced one of several Baptisms during his lifetime. Dave was a gregarious, loving, generous “old soul”. He loved music of all types, especially live concerts, and enjoyed picking his own guitar to relax at home. He loved beer and as “Fate” would have it, he chose a career he truly enjoyed as the “Bud Man”, where he never had to “work a day in his life”. His greatest joy in life though was his daughter, Megan Christine. She was the “apple of his eye” and he loved her dearly and was so very proud of her. Especially the loving Mother she has become to her awesome and beautiful daughter, Savannah Marie. Dave began his military career in 1974 in Atlanta, GA, where he enlisted in the US Navy. Stationed in Jacksonville, FL, Tech Sergeant Gillespie became sonar trained. He was extremely proud to have served on many international tours of duty which took him around the world. After his full time Navy assignment, he served faithfully as a “weekend warrior” for most of his twenty plus years of military service. He joined the reserves in the Army National Guard and transferred to the Air National Guard, 283rd Combat Communications Squadron at Dobbins Air Force Base, GA in 1999 until his retirement in 2012. His dedication and bravery are evident by the numerous commendations, medals and awards he received throughout his military career, which included serving during Operation Desert Storm in the Persian Gulf War onboard the Theodore Roosevelt aircraft carrier, as well as one of his final international assignments which took him to Kyrgyzstan in Central Asia in support of the War in Afghanistan in 2010. A memorial service and interment will be held at the Georgia National Military Cemetery, 1080 Scott Hudgens Drive Canton, GA 30114. The date and time will be delayed due to COVID restrictions and will be posted here when confirmed. In lieu of flowers, please send donations to the Georgia Military Cemetery at the above address. Condolences may be sent or viewed at www.wagesfuneralhome.com. Tom M. Wages Funeral Service, LLC, “A Family Company,” 120 Scenic Highway, Lawrenceville, GA 30046 (770-963-2411) has been entrusted with the arrangements.

Charles David &#8220;Dave&#8221; Gillespie, age 65, died peacefully in his sleep at his home in Hoschton, GA early Sunday morning, 15NOV2020, after a valiant effort to recover from a stroke and traumatic brain injury. Dave is survived by his... View Obituary & Service Information

The family of Charles David Gillespie created this Life Tributes page to make it easy to share your memories.

Send flowers to the Gillespie family.