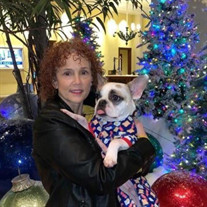 Please check back as service arrangements will be announced shortly. See the complete obituary below. Cathy Ivey Barrows, age 60, of Lawrenceville Ga passed away on Sunday January 16th 2022. She was preceded in death by her parents, William... View Obituary & Service Information

The family of Cathy Ivey Barrows created this Life Tributes page to make it easy to share your memories.

Please check back as service arrangements will be announced shortly....

Send flowers to the Barrows family.