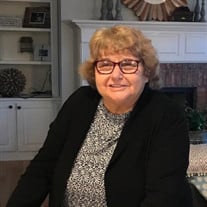 Carol Francis Belli, Age 74 of Snellville, GA, went Home to Jesus on April 13, 2022. She was preceded in death by her Father, Raymond Lavoie, Mother, Isabelle and Brother Ronald. Carol is survived by David, her loving Husband of 56 years and served alongside him as a Soldiers Wife for 21 of those years. Carol also leaves behind Daughters Christine Darnell and Angela Moynihan, Grandchildren Taylor and Kyle Darnell, Jack, Luke and Addie Moynihan and Great-grandchildren Samara and Aubree Bannister, along with Son’s-in-law Danny Darnell and Sean Moynihan. She fiercely loved her Sisters and Brothers, Beverly Beaudoin, Marlene Lamb, Debbie Olden and Raymond and Bobby Lavoie. Not a day passed when she didn’t mention one or the other…or talked with one of them over the phone. Carol now also watches over her God-children Craig Beaudoin and Katrina Olden as well as a score of Nieces and Nephews. A devoted homemaker and everybody’s “Meme”, Carol was a communicant of St. Oliver Plunkett Catholic Church in Snellville, GA. Meme always told her grands that she “Loves you to the Moon and Back. More than the Stars in the Sky!” She never met a stranger and would chat you up in the grocery line or adore your kids as they passed by. She took great pride in her home and, like painting a bridge, seemed to never be done “cleaning”: “Just a little dusting” or “Gonna’ pass the mop one more time”. Time, however, was immaterial to her. Appointments were mere “suggestions” and as maddening as that was, we loved her for it…because…after all…she was our “Meme”. FUNERAL SERVICE INFORMATION: VIEWING: Wednesday, April 20, 2022, 9:00 AM to 10:30 AM, at Tom M. Wages Funeral Home, 3705 Hwy 78 W, Snellville, GA. (PH: 770-979-3200). REQUIEM MASS: Follows at 11:00 AM, (same day), at St. Oliver Plunkett Catholic Church, 3200 Brooks Drive SW, Snellville, GA 30078 (PH: 770-979-2500). NOTES: As this is Easter Week, the church will already be filled with flowers. However, flowers may be sent directly to the Funeral Home for the Viewing in the name of Carol F. Belli. RECEPTION: Immediately follows the Requiem Mass in the church hall. STREAMING: For those of you who cannot be physically here with us, and would like to experience Carol's Requiem Mass, it will be LIVE STREAMED directly from St. Oliver Plunkett Catholic Church on Wednesday, April 20 at 11:00 AM. Go to YouTube.com and search as follows: St. Oliver Plunkett Snellville Scroll down a bit and you'll see the window showing her Mass. It should be the first one. Go there a few minutes before start time. You might want to do a "dry run" beforehand. The Requiem Mass will remain on the site in perpetuity... DONATIONS: Donations in the name of Carol F. Belli may be made to St. Oliver Plunkett Catholic Church, Society of St. Vincent de Paul. (Founded in Paris in 1833, the mission of the Society of St. Vincent de Paul is a "society of friends, inspired by Gospel values, growing in holiness and building a more just world through personal relationships with, and service to, people in need." Since its founding, The Society has grown to 800,000 members in over 150 countries with 1,500,000 volunteers).

Carol Francis Belli, Age 74 of Snellville, GA, went Home to Jesus on April 13, 2022. She was preceded in death by her Father, Raymond Lavoie, Mother, Isabelle and Brother Ronald. Carol is survived by David, her loving Husband of 56 years and... View Obituary & Service Information

The family of Carol Francis Belli created this Life Tributes page to make it easy to share your memories.

Send flowers to the Belli family.