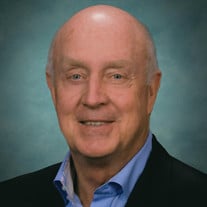 Buddy King, age 76 of Snellville, GA, passed away Friday, October 25, 2019. Buddy was preceded in death by his wife, Donna Fern King. Buddy is survived by his son, Greg King; his daughter and son-in-law, Faith King Williams and Scott Williams; grandson, Jesse Williams; brother, Wayne King; sisters-in-law, Susan King, Gail King, Becky Fern, and Gloria Fern; brothers-in-law, David Fern and Dwight Fern; many nieces and nephews; and a host of other relatives. Buddy was a native of Atlanta, GA. He attended Brown High School and University of Florida and worked in Commercial Development for Kim King and Associates. Buddy was also a member of First Baptist Church of Snellville. The Celebration of Life Service will be held on Sunday, November 3, 2019 at 2:00 PM at Tom M. Wages Snellville Chapel. Inurnment will follow at Snellville Historical Cemetery, Snellville, GA. The family will receive friends also on Sunday, November 3, 2019 from 1:00 PM until 2:00 PM at the funeral home. In lieu of flowers, send gifts to missionaries Buddy has supported over the years serving the Lord with MTW in New Zealand, Paul and Crystal Henry. Make sure to note that the gift is for Paul and Crystal Henry in memory of Buddy King and send to: Mission to the World, PO BOX 744165, Atlanta, GA 30374-4165 Condolences may be sent or viewed at www.wagesfuneralhome.com. Tom M. Wages Funeral Service, LLC, A Family Company, 3705 Highway 78 West, Snellville, GA 30039 (770-979-3200) has been entrusted with the arrangements.

The family of Buddy King created this Life Tributes page to make it easy to share your memories.

Send flowers to the King family.