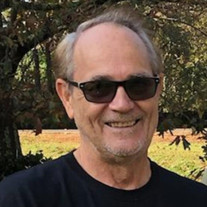 Billy L. Icenogle, age 68 of South Carolina, passed away on Monday, February 22, 2020. He was preceded in death by his father, James D. Icenogle, step father Anthony Humphrey, and beloved wife Marilyn Icenogle. Billy is survived by his children Billy Jr, Christy Khrosavi-Far, and John as well as numerous grandchildren. Billy also leaves a very loving mother, Ruth Humphrey, two brothers, Winfred and Ricky and a sister Loretta. He was also loved by numerous nieces and nephews. Billy was born in Pittsfield, Illinois on August 1, 1952. After graduating from Pine Forest H.S. in Fayetteville, NC, Billy joined the Navy where he served on the USS Eisenhower. Upon honorable discharge, he started work at CP&L in North Carolina. He retired in November 2007 and worked various subcontracting jobs until he was hired by ZF Industries. He enjoyed his work at ZF and was highly regarded by friends and co-workers and described as a mentor to fellow co-workers. He was loved dearly by family and friends. Billy enjoyed yard work, creating and building various home projects, as well as creating projects on the computer. In lieu of flowers, the family requests memorial donations may be made to the American Cancer Society, Wounded Warriors, or Tunnel to Towers. There are no services planned at this time. Condolences may be sent or viewed at www.wagesfuneralhome.com. Tom M. Wages Funeral Service, A Family Company, 3705 Highway 78 West, Snellville, GA 30039 (770-979-3200) has been entrusted with the arrangements.

The family of Billy Leon Icenogle created this Life Tributes page to make it easy to share your memories.

Send flowers to the Icenogle family.