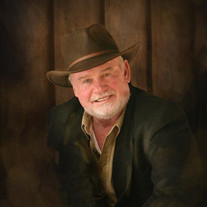 Billy Wendell Ewing, 71, went to his heavenly home on October 19, 2021. His love for his family and his belief in God supported him and ultimately provided him peace. He will be remembered with love long after his passing. Billy was born to the late Ralph Lamar Ewing Sr. and Audrey Hughes Ewing, farmer, partner in the fields and homemaker respectively in Snellville, Georgia on February 5, 1950. Billy was in the Automotive Business Industry that would be his lifelong support from an early age. He was a graduate form Dekalb Tech. He worked for several auto dealerships until opening his own business in 1976, Ewing Automotive. Billy professionally drag raced Pro Stock for IHRA and NHRA for 30 years. He successfully opened a second location of Ewing Automotive in 2012. His love of engineering and mechanically repairing cars started at a very young age on his family farm where he built his first car. His family roots and love for farming found him in his later years creating a beautiful farm haven in Madison, Georgia where he returned to his roots of farming. Billy was a man of vision, creativity and his hard work showed his true mindset along with a will that surpassed many. Billy was blessed with a loving family. He married his High School sweetheart, Brenda Dutton Ewing at Gloster Baptist Church in Lawrenceville, Georgia on August 2, 1968. Billy was a dedicated, hardworking father who would walk the line for any of his children and grandchildren. A child at heart paired with his beloved Jack Russell Terrier, “Dugo.” A favorite for this childish heart was golf cart rides on the farm, “Spider Man” movies and banana popsicles with his grandchildren. Please don’t forget the film “Tombstone – “I’ll be your huckleberry.” He loved people and mostly his family! People also loved him, he never met a stranger. He was a lion with the heart of a lamb, having a mighty roar but a gentle spirit. Billy loved to work and the gratitude of his hard work came with generous giving to others. He always had a project in mind to create and make that “something” beautiful. Billy never wanted a new vehicle, but always a “fixer upper;” again, making that “something” beautiful. He was always teaching life skills and discipline to others who came in his path. Billy was witty with a punch line to make you smile and think. If he really liked you, you would find yourself with a nickname. He will be dearly missed by his loved ones who celebrate that he is at peace with his Creator. He accepted the Lord Jesus Christ as his Savior on April 5, 2020. Billy is survived by his wife of 53 years, Brenda Dutton Ewing; daughter, Robin Ewing Brown; son-in-law, Matthew Clay Brown; granddaughter Wren Kellan Brown (age 7); daughter, Amanda Ewing Scoggins; son-in-law, Timothy Woodliff Scoggins; grandson, William Nathanael Scoggins (age 6); son, Billy Joseph Ewing; sister, Winnell Freeman; brother-in-law, Glenn Freeman; brother, Larry Ewing; brother, Barry Ewing; brother, Don Ewing; sister-in-law, Cathy Ewing. He is preceded in death by his parents, Ralph Ewing, Sr. and Audrey Ewing, and brother Lamar Ewing, Jr. The viewing will be held on Friday, October 22, 2021 from 4:00 pm to 8:00 pm at Tom Wages Funeral Home located at 3705 Highway 78 West Snellville, Georgia 30039. The funeral service will be Saturday, October 23, 2021 at 2:00 pm at Apalachee Oaks Farm. “The Farm” is located at 1430 Beal Lane in Madison, Georgia 30650. He will be buried following the funeral service, at Eternal Hills Cemetery located at 3700 Highway 78 West Snellville, Georgia 30039 on Saturday, October 23, 2021. The Bostwick Cotton Gin Festival is happening that day (please prepare for traffic). Due to COVID-19 regulations, our staff is committed to taking care of our guests and families that we serve. We also ask all guests and family members attending visitations and services to please continue social distancing and if desired to bring and wear a mask. Condolences may be sent or viewed at www.wagesfuneralhome.com. Tom M. Wages Funeral Service, A Family Company, 3705 Highway 78 West, Snellville, GA 30039 (770-979-3200) has been entrusted with the arrangements.

Billy Wendell Ewing, 71, went to his heavenly home on October 19, 2021. His love for his family and his belief in God supported him and ultimately provided him peace. He will be remembered with love long after his passing. Billy was born... View Obituary & Service Information

The family of Billy W. Ewing created this Life Tributes page to make it easy to share your memories.

Billy Wendell Ewing, 71, went to his heavenly home on October...

Send flowers to the Ewing family.