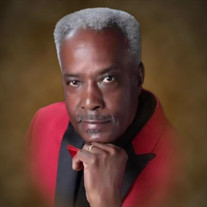 Please select this link to livestream the service for Billy Earl Clayton Billy Earl Clayton was born in Bessemer, Alabama on August 15th in 1948. He was the devoted son of Geraldine & Robert Early. Billy attended Wenonah High School in Bessemer, AL and worked as a restaurant employee growing up. After graduating High School Billy relocated to the Metropolitan New York area which he was employed by Con Ed, starting out as a line man, and retiring as an Inspector Supervisor. Billy was a member of the Masonic Lodge and Travelers Club in Queens, NY. In 1991 Billy along with his wife and family relocated to Stone Mountain, Georgia. During his time in Stone Mountain, he was employed with Meadows and Ohly as a Property Manager for over 20 years, he retired in January of 2020 (for a second time). Recently he came out of retirement and was employed with Homeowners Advantage in Midtown Atlanta as a Property Manager. Billy enjoyed cooking for his family, dancing, fine dining, traveling with his beloved wife, and motorcycle riding with the Pantera Motorcycle Club which he has served as past Vice President and known as “Wild Bill”. Billy had several names he was affectionally known as, “Punkie” by his wife Linda, Papa by all of his grandchildren and great-grands, and “Silver Fox” by his sister-in-law Lola and "Billy Bob" by his sister in law Lina McMillian. On November 29, 2021 God called Billy home at the age of 73. He was preceded in death by his father, Ruben Williams; his brothers, Michael Clayton, Larry Clayton, and Melvin Stepney; Billy is survived by his loving wife, Linda Clayton; his devoted mother, Geraldine Early; and children, Chandra Deloach (Dan Sr.), Jared “Jay” Monts (Jamiyla), Juaacklyn “Jackie” Singleton (Jeffrey), Jewel Bearden (Antonio); and his youngest baby girl, Briana Clayton; in addition to a daughter in-law, Daniella Faison; he had thirteen grandchildren, Chandia, Kevin Jr, Alexis, Jasmine, Dan Jr., D’nasia, Javonte, Nakai, Dakari, Zyan, Gavin, Amani, and Bella; four great grandchildren, Jakari, Junior, Jonah and Grayson; four God children, (Terresa Knowles, Destry Adams, Sandra & India Blake); Billy also leaves to cherish his memories with his loving sisters, Lillie Pearl Trainer (George) and Patricia Allen; one brother, Tony Early (Talina); his two sisters in law, Lina McMillian, Lola McMillian- Hale; and brother-in-law, Lamont McPherson (Shawane); his two loving aunts, Christine Lee, and Rev. Dorothy Nunn; a host of nieces, nephews, and cousins as well as a host of many friends because Billy never met a stranger. Notable sisters and brothers, Melinda & Gregory Baker, Yvette & Robert Campbell, Detra & Shawn Dawson, Susie & Scott Shephard. The service to celebrate the life of Billy Earl Clayton will be held on Tuesday, December 7, 2021 at 11:00 AM at Tom M. Wages Snellville Chapel. Interment will follow at Mellwood Cemetery, Stone Mountain, GA. The family will receive friends on Monday, December 6, 2021 from 6:00 PM until 8:00 PM at the funeral home. Due to COVID-19 regulations, our staff is committed to taking care of our guests and families that we serve. We also ask all guests and family members attending visitations and services to please continue social distancing and if desired to bring and wear a mask. Condolences may be sent or viewed at www.wagesfuneralhome.com. Tom M. Wages Funeral Service, A Family Company, 3705 Highway 78 West, Snellville, GA 30039 (770-979-3200) has been entrusted with the arrangements.

[Please select this link to livestream the service for Billy Earl Clayton]https://view.oneroomstreaming.com/authorise.php?k=1638733746151977 Billy Earl Clayton was born in Bessemer, Alabama on August 15th in 1948. He was the devoted son of... View Obituary & Service Information

The family of Billy Earl Clayton created this Life Tributes page to make it easy to share your memories.

Please select this link to livestream the service for Billy Earl...

Send flowers to the Clayton family.