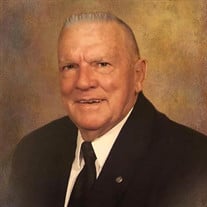 Billie Gene Brown, age 89 of Snellville, Georgia, passed away peacefully at The Phoenix at Tucker Assisted Living on Saturday, May 29, 2021. Billie was born on October 1, 1931 in Marietta, Georgia. He attended Fulton High School and graduated in 1949. He served in the United States Army (active duty) during the Korean War from 1951 until 1954. He obtained the rank of Sergeant and received the Good Conduct Medal, Korean Service Medal with 3 Bronze Stars, National Defense Service Medal, and United Nations Service Medal, with honorable discharge in 1954. He joined the City of Atlanta Police Department in December of 1955, and served as a decorated patrol officer and detective sergeant, before concluding his career as an Atlanta Public Schools Detective until his retirement in 1983. Billie lived in Atlanta and Decatur, prior to relocating to Snellville in 1972, where he remained a resident. He was a long standing member of South Gwinnett Baptist Church, in Loganville, Georgia. He was an active member of the East Atlanta and Grayson Masonic Lodges, where he served as Grand Master and Treasurer for many years. He was also a member of the Snellville Lions Club, where he served in many capacities for several years. Billie was preceded in death by his wife, Johanne Ward Brown, parents, Eugene Brown and Blanche Cornett Brown; sister, Mary Frances Billingsley; and brother, Marvin Brown. He is survived by his current wife, Verlie (Kitty) Smith Brown; daughter, Mary Ellen Brown Cook; son, Billy Wayne Brown; son-in-law, Clyde Cook; grandchildren. Danielle Cook, Amanda Taylor, Joshua and Heather Brown, Shanna Cook, Chip and Sherry Cook, Rick and Vonceil Cook; great-grandchildren, Rebecca Taylor, Michael Taylor, Georgia Brown, David Brown, Aaron Morgan, Everleigh Wiggins; Ethan Cook, Amelia and Tyler Scharafanow, Sarah Cook, Hannah Cosma, Samuel Cook, Rachel Cook, and Lydia Cook; several beloved nieces, nephews, their spouses and children. A funeral service will be held on Thursday, June 3, 2021 at 11:00 AM at Tom M. Wages Snellville Chapel. Interment will follow at Resthaven Garden of Memory, Decatur, GA. The family will receive friends on Wednesday, June 2, 2021 from 6:00 PM until 8:00 PM at the funeral home. In lieu of flowers, memorial donations may be made to the Alzheimer’s Association, www.alz.org. Due to COVID-19 regulations, our staff is committed to taking care of our guests and families that we serve. We also ask all guests and family members attending visitations and services to please continue social distancing and if desired to bring and wear a mask. Condolences may be sent or viewed at www.wagesfuneralhome.com. Tom M. Wages Funeral Service, A Family Company, 3705 Highway 78 West, Snellville, GA 30039 (770-979-3200) has been entrusted with the arrangements.

Billie Gene Brown, age 89 of Snellville, Georgia, passed away peacefully at The Phoenix at Tucker Assisted Living on Saturday, May 29, 2021. Billie was born on October 1, 1931 in Marietta, Georgia. He attended Fulton High School and graduated... View Obituary & Service Information

The family of Billie Gene Brown created this Life Tributes page to make it easy to share your memories.

Send flowers to the Brown family.