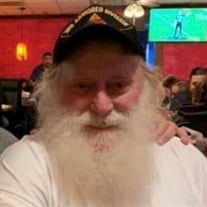 Barry W. Luther of Snellville, Georgia, born February 6, 1946, passed April 10, 2022. Mr. Luther was born to Reginald and Emily Luther in Saugerties, New York. He served in the United States Army during the Cold War from 1963 to 1966 for the 3rd Armored Division (Spearhead). Mr. Luther is predeceased by his parents; brothers, James Luther, Ernest Luther; sisters, Regina Luther Buley, Marlene Luther; as well as numerous other family members of the animal kingdom. He is survived by his wife, Ronna Luther of Snellville, Georgia; daughters, Beth Luther McCann of Georgetown, Colorado, and Dr. Rita Luther of Casselberry, Florida; two step sons, Joshua Pelock of Denver, Colorado, and Matthew Pelock of Snellville, Georgia; 10 grandchildren; brothers, Rusty Luther of Palenville, New York, Edwin Luther of Saugerties, New York; and sisters, Eileen Luther Araujo of Palm Coast, Florida, Anita Luther Hinchey of Saugerties, New York, Priscilla Luther Whitaker of Dunellon, Florida; more than 40 nieces and nephews; as well as several grandpuppies and grandkitties. Mr. Luther worked as an auto mechanic for many dealerships in and around Atlanta, Georgia. As a classic car enthusiast, he loved anything “hot rod”. He was known as “Yank” among colleagues and fellow hot rod enthusiasts. Valued as one of his greatest contributions was his investment of thousands of hours to Atlanta area youth sports programs as “Coach". During these years, he loved coaching softball, baseball, football, and basketball to team participants and teaching future generations the values of hard work, learning from your mistakes, good sportsmanship, and teamwork. Mr. Luther was loved by many and always said that “he never met a stranger” as he could walk into any room and within five minutes know your whole life story and how your lives crossed paths in ways you never realized. Mr. Luther was also known as “Santa” by many young at heart. If anyone is concerned about future Christmas deliveries. Not to worry. He planned ahead. There are no services planned at this time. Condolences may be sent or viewed at www.wagesfuneralhome.com. Tom M. Wages Funeral Service, A Family Company, 3705 Highway 78 West, Snellville, GA 30039 (770-979-3200) has been entrusted with the arrangements.

Barry W. Luther of Snellville, Georgia, born February 6, 1946, passed April 10, 2022. Mr. Luther was born to Reginald and Emily Luther in Saugerties, New York. He served in the United States Army during the Cold War from 1963 to 1966 for the... View Obituary & Service Information

The family of Barry Wayne Luther created this Life Tributes page to make it easy to share your memories.

Send flowers to the Luther family.