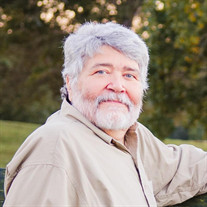 Alan Haze England, 62 of Dacula, Georgia passed away on March 16th, 2021 after a long battle with Polycystic Kidney Disease (PKD) and other chronic illnesses. Alan was born on November 26th, 1958 to Mack Allen and Lora June (Douglas) England at Andrews Air Force base. Alan graduated earlier than most of his peers from LaFollette High School in 1975. In 1980, he met the love of his life, Maureen Fay (Hanson) England, and they wed on October 25th of that same year, going on to have two children, Nicole Elizabeth (England) Sapp and Brandon Alan England. His family meant more to him than anything else in the world, something he often mentioned. He was unendingly proud of both his children, and Maureen, and always tried his best to support them. Anyone who knew Alan knew that he was also the most loving and proud Little Papa that his two granddaughters, Isabell Lora and Olivia Fay, could ask for. Alan was also a passionate Georgia Tech fan and could often be found cheering on his favorite football team, the Georgia Tech Yellow Jackets, on fall Saturdays. He loved camping with his family and friends, riding his Harley Davidson, reading and playing chess. Alan was predeceased in death by his mother Lora June England, and his brother Garry Wayne England. He is survived by his wife Maureen, his dog-son Charles, his father Mack England of Dacula, GA, his daughter Nicole (Jeffery) and granddaughters Isabell and Olivia Sapp and grand-dog Paisley of Jefferson, GA, his son Brandon (Amanda) England and grand-dogs Houdini and Bear of Dacula, GA, and several more family and friends. The family requests that in lieu of flowers memorial donations be made to the PKD foundation. Cards of sympathy can be sent to Tom M. Wages Funeral Service- Lawrenceville. A graveside service to honor and celebrate the life of Alan England will be held Saturday, March 27th, 2021 at 2pm held at Gwinnett Memorial Park with Mr. Kevin Martin officiating. The family request that guests wear navy and/or old gold colored clothing in honor of Alan’s love for the GT Yellow Jackets. The family will receive loved ones after the memorial service starting at 3pm in the Tom M. Wages Funeral Service- Lawrenceville Community room.

The family of Alan Haze England created this Life Tributes page to make it easy to share your memories.

Alan Haze England, 62 of Dacula, Georgia passed away on March...

Send flowers to the England family.