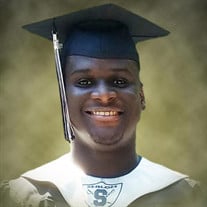 Adrian Javon Murray (aka J.V.) was born on April 28, 2001 in Northside Hospital in Atlanta, GA. He passed away on the morning of July 7, 2021. He was the 2nd oldest of four children born to Adrienne T. and Errol A. Murray, Jr. His siblings are older brother Errol A. Murray, III, younger sister, Kaylani R. Murray and younger brother Kai D. Murray. Adrian attended Norton Elementary School and Shiloh Middle School, where he ran track and played the cello. He graduated in May, 2019 from Shiloh High School in Snellville, GA and was awarded a full scholarship to attend the Historically Black College, Hampton University in Hampton, Virginia. There he majored in music. He was very excited to go away to college and excelled academically. His love of music allowed him to also play the tuba and the bassoon. He was an active member of the Hampton University Marching Pirates and performed in the prestigious Battle of the Bands Competition in 2020 in Atlanta, GA. Unfortunately, due to the Covid19 pandemic, the campus closed and Adrian was forced to return home to complete the semester virtually. He did so while maintaining employment at Chick-Fil-A. Adrian enjoyed anime and loved video games. He would play for hours with his brothers and friends. For many years he would attend the AWA Anime Convention at the Cobb Galleria. Adrian was a quiet, kind and gentle person with an amazing sense of humor. His comedic timing was always on point and kept his family and friends laughing all the time. He was also well liked by the young ladies. Adrian was preceded in death by his grandfather, Warren Jackman; and his uncle, Cory Duhaney. He leaves to mourn his parents, Adrienne and Errol Murray, Jr.; his sister, Kaylani Murray; his brothers, Errol Murray, III and Kai Murray; his grandmothers, Janet Medina and Geraldine Linton; his grandfather, Errol A. Murray, Sr.; and a large number of aunts, uncles, cousins and friends. Adrian will be dearly missed but his memory will live in our hearts forever. The memorial service to celebrate the life of Adrian Javon Murray will be held on Sunday, July 25, 2021 at 3:00 PM at 12 Stone Church Snellville, 1709 Scenic Hwy S, Snellville, GA 30078. Due to COVID-19 regulations, our staff is committed to taking care of our guests and families that we serve. We also ask all guests and family members attending visitations and services to please continue social distancing and if desired to bring and wear a mask. Condolences may be sent or viewed at www.wagesfuneralhome.com. Tom M. Wages Funeral Service, A Family Company, 3705 Highway 78 West, Snellville, GA 30039 (770-979-3200) has been entrusted with the arrangements.

Adrian Javon Murray (aka J.V.) was born on April 28, 2001 in Northside Hospital in Atlanta, GA. He passed away on the morning of July 7, 2021. He was the 2nd oldest of four children born to Adrienne T. and Errol A. Murray, Jr. His siblings are... View Obituary & Service Information

The family of Adrian Javon Murray created this Life Tributes page to make it easy to share your memories.

Send flowers to the Murray family.